Cynthia Levinson's MY LIFE IN THE CIRCUS 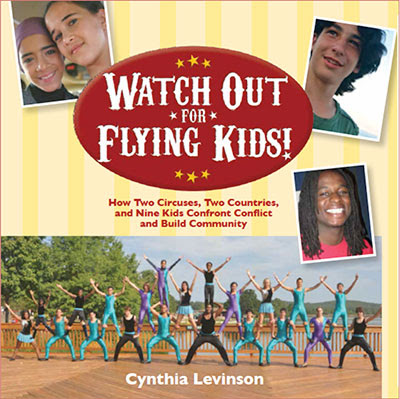 MY LIFE IN THE CIRCUS
Cynthia Levinson

You might remember, from the wonderful Broadway musical “A Chorus Line,” the song called “What I Did for Love.” Now that my second middle-grade nonfiction book is out, I think, “Oy. What I did for research.”
Watch Out for Flying Kids! How Two Circuses, Two Countries, and Nine Kids Confront Conflict and Build Community (Peachtree Publishers) tells the stories of nine otherwise normal teenagers who, when they’re not going to school and taking selfies with their friends, perform in the circus. Five of them are (actually, were, since they’ve graduated) members of the St. Louis Arches, the top performing troupe of Circus Harmony in St. Louis, Missouri. The other four tumble, acro, juggle, wire-walk, contort, and do other crazy things with the Galilee Circus in northern Israel. In addition to being professional-caliber performers, what makes these kids remarkable is that they’re about as diverse a group of young people as you could fit into a single ring, which is where you can regularly find them. (The image to the right is of Cynthia learning the ropes - literally.) 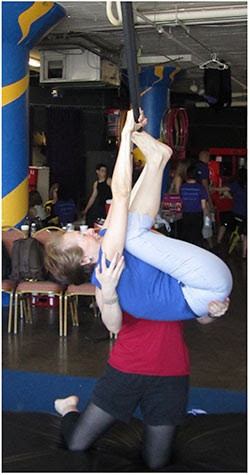 The St. Louis Arches featured in the book include two black kids from Ferguson-like neighborhoods and three whites, two of whom live in the western suburbs. The Galilee Circus is composed of two Israeli Arabs and two Jews, who live in villages only three miles yet a world apart. Both programs call themselves “social circuses” because they pursue social justice through circus arts.
Every other year, this mélange of Christian, Muslim, Jewish, secular, English-, Hebrew-, Arabic-speaking, and one fully covered, hijab-wearing contortionist get together in one country or the other. The circuses’ partnership goes back eight years, and, by now, the troupers are accustomed to learning each other’s tricks, and living together and communicating despite the lack of a common language or cuisine.
For an aging nonfiction writer who likes to delve deeply into her subject matter, however, it’s been a different story. There were no secondary sources. So, through the three years it took me to research and write Flying Kids, I conducted over 125 hours of interviews, which entailed

Most ridiculous of all was trying out circus tricks. You can watch me make a fool of myself falling off of both a mini-trampoline and a globe. 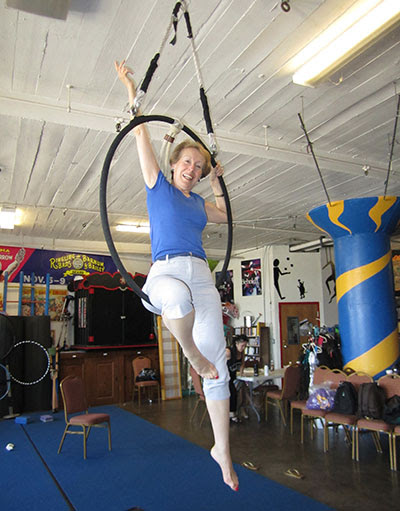 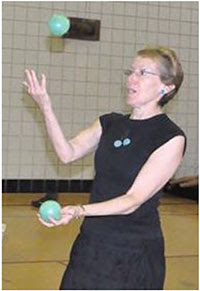 Then, there was the matter of figuring out how to write a book with nine main characters, multiple secondary characters, and two settings, one of which was, apparently, exotic. When I asked writer friends who have kids what they know about the Galilee, one said,

“I asked my neighbor's daughter, who is 13. Said she, ‘Isn't that where Puff the Magic Dragon lived?’"
Me: "I'm fairly certain he frolicked in Honah Lee."
Her: "'Well I know it has to be a place. I just don't know where. Probably, far, far away, like Florida.’”

Also, there were the tribal politics in Israel and racial politics in St. Louis. Weaving the line of fairness to everyone while not losing readers in a morass of despairing historical events was as tricky as wire-walking. I sent so many pathetic, whiny messages to my editor about why I couldn’t possibly write the book that she sent me a copy of The Little Engine that Could. 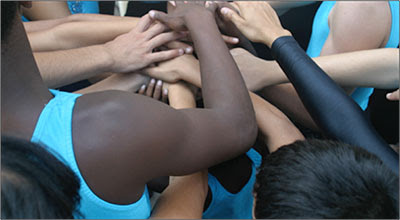 But, ultimately, I did write Watch Out for Flying Kids. My short-hand synopsis goes, “Ferguson gets together with the West Bank—and they juggle.” I hope you’ll delve into it and see what that means.

Here's Cynthia's workspace. During this project she commandeered the dining room table. 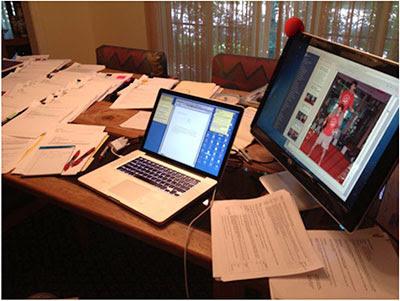 Learn more about Cynthia and Watch Out For Flying Kids at her website: www.cynthialevinson.com.
at September 03, 2015