Porty is full of surprises

We returned to Portobello Beach (called "Porty") this past weekend because there was an arts festival going on. And gee - twist our arms to go back to the beach again. Even so, the day turned out differently from what we expected.
We're getting better at the buses, so that part was easy. 30 minutes and we're at the beach and on the most beautiful day! We went back to the Espy for lunch - our first repeat meal in Scotland. 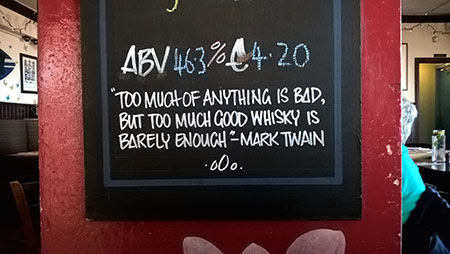 However, a woman at the table next to us had a medical emergency, which made for a scary and stressful situation for all involved. After a while, I'm happy to say, she walked out of the restaurant on the arm of an EMT. We were so impressed by how well the wait staff handled the emergency. We also learned an important lesson - in the US you dial 911, in the UK, you dial 999.
Afterwards, we got back to our original plan and followed the Art Festival's map to a few artist's studios. Like this one where the artist works with found objects from the beach: 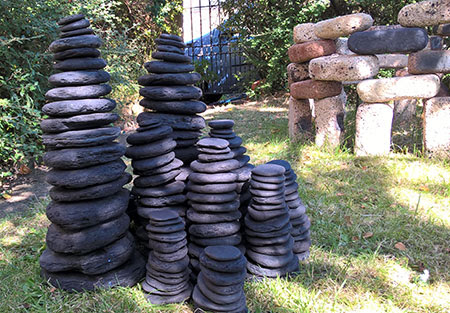 We also walked on the beach for a while. There, we came across some of the happiest dogs on the planet. Flo was digging a hole. Her friend Mazie was also digging a hole - all I could see of her was her rump and her wagging tail sticking out of the hole. But I missed the shot. Oh well. I tell you, the dogs on Portobello Beach are the happiest dogs EVAH!

Afterwards, we stopped for a bit in a lovely pub called Foresters. 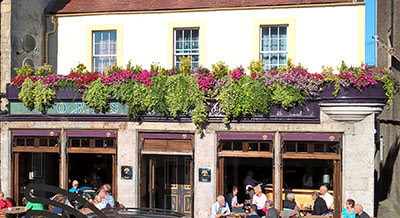 The doors were wide open to the gorgeous day. 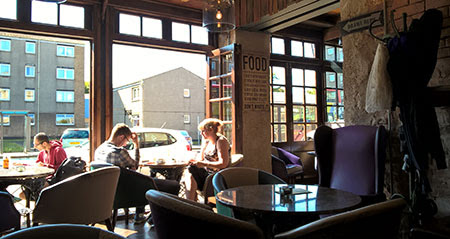 They also had a secret in the back - the most adorable outdoor seating. 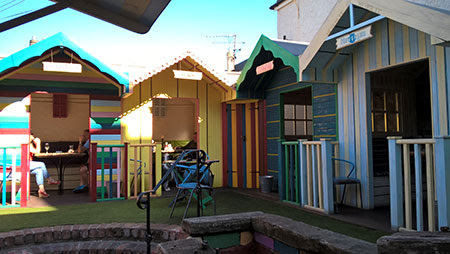 We're discovering that a lot of businesses have secrets you'd never guess are there. We're getting good at finding the secret gardens and paths in Edinburgh. They're so lovely!
But back to Porty. Our friend Louise Kelly told us about a festival going on in Porty and frankly, we never would have found it if she hadn't told us. We walked down a sweet little street, where we stumbled across a bowling club.

Further down the road we stumbled into The Portobello Village Show. Oh my! 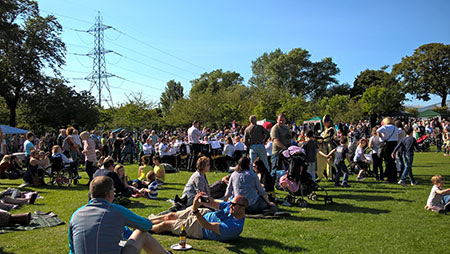 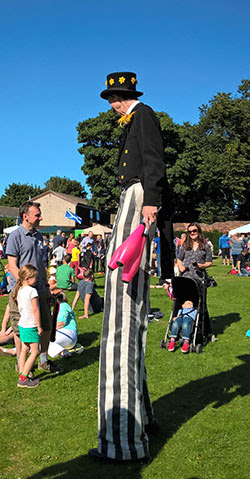 There was a brass band playing. (Can you see them in the center?) They played Willy Wonka - awesome. There was a juggler. A guy in tights riding a fake horse. Louise was working at a book sale raising money for their upcoming book festival, so we bought several. There was a baking contest, and a dog show. We got to pet so many happy doggies, including a Scottish Deer Hound. Ever seen one of those? They are HUGE!
It was such a gorgeous day, do you see these blue skies? Stan and I laid in the grass and soaked it all in, the warmth (about 64°), the sounds, the music. I've rarely been so content. 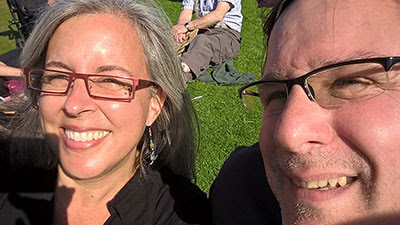 Porty is great and you are welcome anytime!

We MUST go back to Edinburgh and SEE everything. Thank you for all the information, your good tourist guide.

Faith - give me a holler when you do! Would love to meet you in person! :) e