Uma Krishnaswami's STEP UP TO THE PLATE MARIA SINGH

In my ongoing series of faculty and visiting speakers to Hollins University's Children's Literature Graduate programs, I bring you long-time email friend, Uma Krishnaswami, who I finally get to meet in person this week!

Reality, Fiction, and Why I Keep on Writing
by Uma Krishnaswami

It’s not always easy being a writer. A lot of people don’t get what I do. Many confess they’d love to write a children’s book. What they mean is that they don’t think it’s that difficult and so they’d love to be, not writers, but the authors of published books. It’s the product they’re after—the bright, glossy picture books, the cute middle-grade jackets with smiley kid faces on them. Who wouldn’t want their names on books for young readers?
I’ll bet those same people would retract their wishes double-quick if I offered them a day at my desk. Working alone—four hours at a stretch without another human being to speak to face to face. A day spent writing 1,000 words and throwing out 500 of them. Facing the 15th revision of a novel and knowing I’m not there yet. Tossing out the picture book idea that has no traction, after spending months trying to wrangle it onto the page. And we’re not talking yet about fielding rejection letters.
So why do I write, other than for the inescapable reason that if I didn’t, I’d be unemployed?
I write because I have to. Because as a child growing up in India, I didn’t see myself in any of the books I read, so it took me until I was thirty-one and a new mother to figure out that real, live people could write children’s books. I write because the stories keep bubbling up. I only write the ones that won’t leave me alone, and there are still enough to keep me going for the rest of my days. 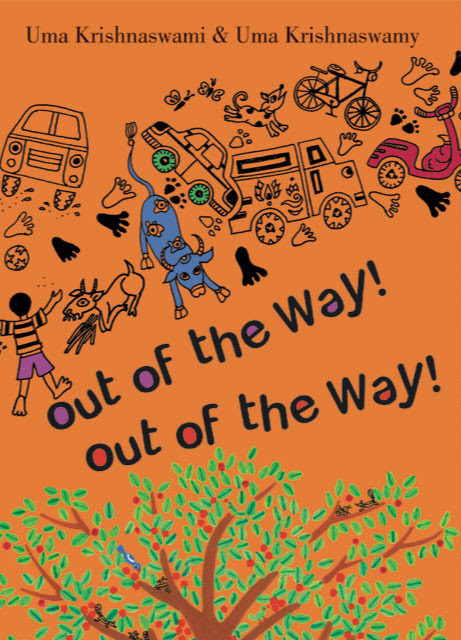 Sometimes I write in order to tell clear and simple truths. Out of the Way! Out of the Way! is the picture book story of a boy who takes a single, simple action, enables a tree to grow, and becomes witness to his changing community. No action, no tree. 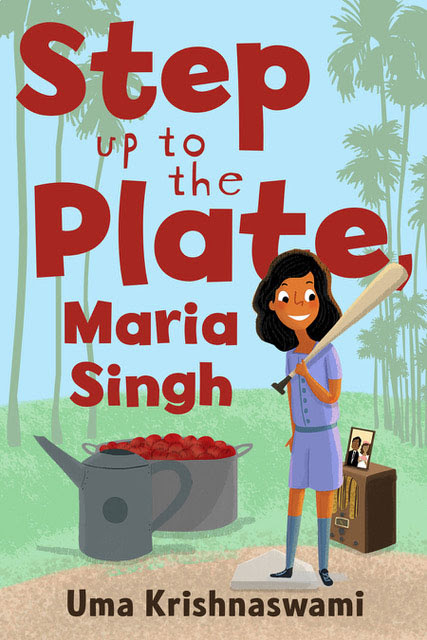 Step Up to the Plate, Maria Singh came from my interest in the stories of so-called “Mexican Hindu” families of California’s Yuba City and Imperial Valley. It began as an intellectual exercise and only became a story when I gave up authorial control and let the character lead the way. For example, I didn’t plan at first for the story to involve softball, but as I wrote successive drafts, that became inevitable. What sport would a girl pick, when what she longed for, above all, was to be recognized as American? I didn’t have a choice. That story led me to meet with descendants of those early Punjabi immigrants in Yuba City, to walk around Yuba City with a 1945 map in my hand, trying to see the place as it might have been. 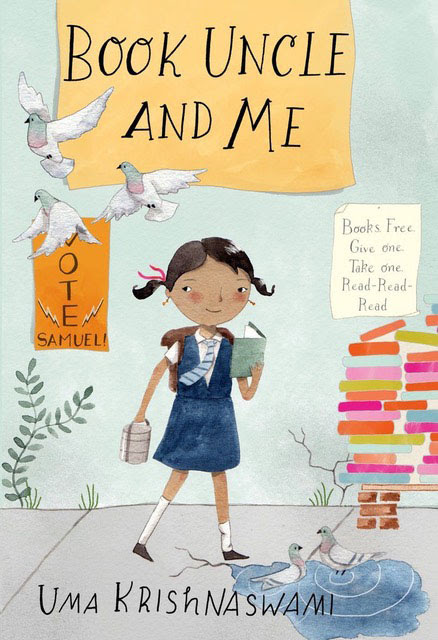 In Book Uncle and Me, nine-year old Yasmin means to read a book a day for the rest of her life. When her supplier is threatened, she needs to take her nose out of her book and do something. There’s an election going on—isn’t that how things change in the real world? But wait—kids can’t vote. But then again, they have a voice. And they should use it, because sometimes grownups just can’t see sense. I don’t say that last part in the book but I sure hope that kids get that subtext. I hope the readers of this book will grow up to be adults who vote, who keep an eye on their communities, who care about fixing corruption and unfairness in the world.
Let’s face it, the world is as beautiful or cruel a place as we humans make it. These days, there are times, especially when I turn on the news, that I’m just about ready to give up on humankind—our collective indolence, fear of powerful bullies, refusal to stand up for what’s right, the instinctive refuge we take in self-interest and self-preservation. But I also see stories of people who are brave and kind and generous and refuse to accept that cruelty and injustice are inevitable—people who put their own lives on the line for freedom and justice, or who volunteer their time and expertise in dangerous places, to help those who need it most.
And me? I write. And maybe, through my writing, I work on conveying a worldview that values hope and justice and fairness. If a book of mine validates child readers, if it helps to make them believe that a tree matters, if it shows them to speak out against unfairness, or imbues them with the will to make a difference—well then, I’ve done my job. I may not live to see that new and improved world for myself, but my readers might. Maybe some of them will even be instrumental in creating it. 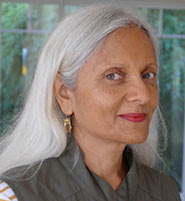 Bio:
Uma Krishnaswami was born in India and now lives in Victoria, British Columbia, Canada. Her story collection, The Broken Tusk: Stories of the Hindu God Ganesha, has been in print for twenty-two years. Uma’s novel, Step Up to the Plate, Maria Singh, is the 2017-18 winner of the Asian Pacific American Award for Literature in the children’s category. Her chapter book, Book Uncle and Me, won the International Literacy Association’s Social Justice Literature Award and is a USBBY Outstanding International Book. Uma teaches in the MFA program in Writing for Children and Young Adults at Vermont College of Fine Arts.
at July 19, 2018