How's this for a treat? Cheryl Klein, American continuity editor for Harry Potter and one of the most popular speakers for conferences across America because she is so chocked full of good advice, has a new book on writing, THE MAGIC WORDS. Her first book on writing, SECOND SIGHT, was a huge hit and this one adds even more information to help every children's book creator. I've learned so much from Cheryl over the years so I'm thrilled to have her drop by to tell us more about it... 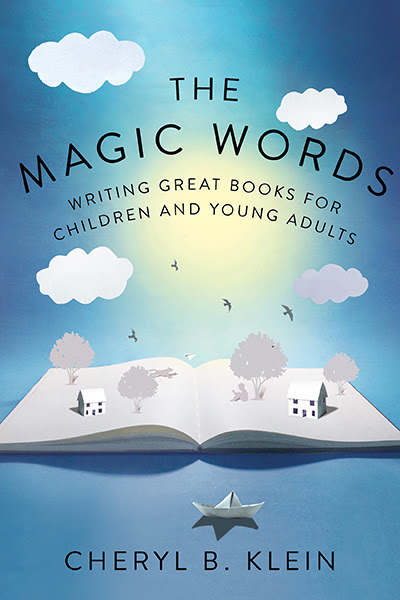 e: As an editor - what do you think makes an illustration magical, what I call "Heart Art” - the sort that makes a reader want to come back to look again and again?

Cheryl: I think it’s a combination of a well-rendered, recognizable reality; an artist’s individual vision of that reality; and a clear idea, action, or (especially in children’s books) emotion communicated through the picture. Without the reality, the illustration has no anchor in common experience; without the vision, it could have been made by anyone; and without the idea, action, or emotion, it’s fine art or flat (or both) — it’s not illustration. 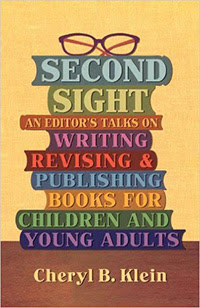 e: I loved SECOND SIGHT. Between that and THE MAGIC WORDS, this book has had quite a journey! What was your path to publication?

Cheryl: In 2005, I started a blog, and put up a few of my talks for writers on the first iteration of my website. The two sites quickly became popular among writers, who eventually began asking when I was going to write a book, and I thought that sounded like a great idea. I created one of the first publishing projects on Kickstarter in order to fund my first printing, and I raised $2000 in nine days. As a result, in April 2011, I self-published a collection of my best speeches and blog posts, entitled Second Sight: An Editor’s Talks on Writing, Revising, and Publishing Books for Children and Young Adults.
The book went through four printings, but as the years passed, I found myself writing more material and refining and deepening a lot of my thinking about the major components of fiction. In late 2014, I decided I wanted to revise the book, ideally with the editorial, marketing, and distribution support a traditional publisher could offer. I found an agent who believed in the book—the excellent Brianne Johnson of Writers House—and she sold it to W. W. Norton, who has truly ben my dream publisher. It’s been an educational and exciting experience all around.

e: As a publisher yourself, what was it like to seek out and work with another publisher?

Cheryl: Fascinating! Three different editors were interested in the book, and I had conversations with all three of them to see which one felt like the right editorial fit -- something I recommend all writers do at the acquisition stage, actually, to be sure the editor's and writer's visions for the project align. My editor, Amy Cherry, described herself as someone who loved nitty-gritty manuscript work, which is exactly what I wanted -- someone who would be as rigorous with my writing as I try to be for the books I work on. (I've actually stolen one of Amy's line-editing techniques -- a checkmark on the page for a nice moment or line.) And I've always admired the quality of W. W. Norton's books and their ethos as a publisher, so being published by them has been a dream come true.

e: What is new in this new version?

Cheryl: So much! I added new essays on the principles of good prose, the elements of writerly talent, how to develop an idea, how to write a novel, how to hook readers into your characters, writing cross-culturally, novel pacing, scene structure, what makes a great first chapter, writing speculative fiction, publishing as a whole . . . Just a ton of stuff. (And some material in Second Sight went away accordingly; the picture-book talk is no longer a part of the book, for instance.) I know readers really valued the practical tools in Second Sight, so I also included more exercises, checklists, and worksheets to help writers define and refine their work.

e: What is your favorite or most challenging part of being a creator? 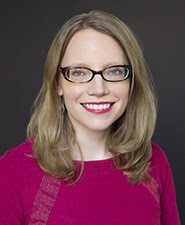 Cheryl:
Most challenging: There are simply too many cool projects to pursue, cool people to work with, cool ideas to try to put into book form — either as a writer myself or as an editor who wants to make great books. In short: There’s not enough time.

Favorite: I love it when someone just absolutely nails an idea or emotion. This might happen when I write something myself and finally pin down all the nuances of a concept that’s always been vague in my head; or it might be one of my authors or illustrators revising a scene so it makes me laugh, or so I feel kicked in the stomach, or simply so I say “Ohh” or “Ahhh” or “Wow.” That’s what I read and write for — moments like that.

e: What is your favorite writing spot?

Cheryl: I'm attaching a photo of my the chaise on my couch here, where probably a third of THE MAGIC WORDS was written or revised. I also worked at my local library branch in Brooklyn; Muse Cafe and Tea in Park Slope, where I went every Sunday after church; and the Betsy Hotel in South Beach, Florida, which was kind enough to invite me to stay in their blissful "Writer's Room" for a residency, where I made the final push on the revision.
Here's Cheryl's fave writing spot - her chaise: 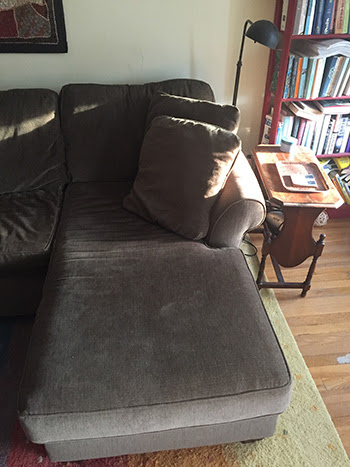