There is just so much to share from this trip to St. Andrews - I have to go on! You saw Jane's house, the walk to town, and St. Mary's. Well, we grabbed a nice lunch in St. Andrews then Jane set us loose to walk around. The big showpiece in St. Andrews is the ruin of St. Andrews Cathedral. According to Wikipedia..."It was built in 1158 and became the centre of the Medieval Catholic Church in Scotland as the seat of the Archdiocese of St Andrews and the Bishops and Archbishops of St Andrews. It fell into disuse and ruin after Catholic mass was outlawed during the 16th-century Scottish Reformation." All I can say is, it's impressive. 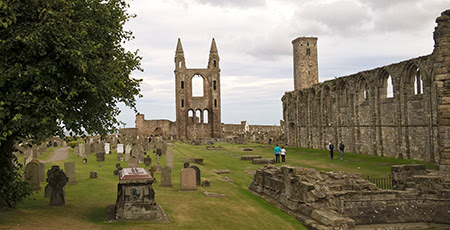 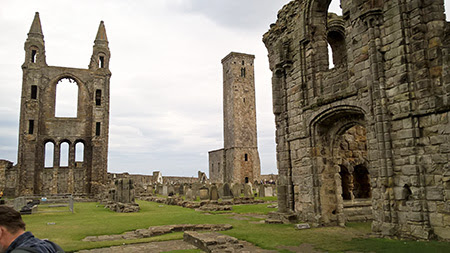 The building was about 391 feet long - longer than an American football field. Imagine walking down that aisle to get married, or if you were feeling guilty about something you did that week!
Sadly, it's been a ruin for so long now, the rocks are smooth and rounded from centuries of weather and rain. But you can still get the idea of how grand it must have been. 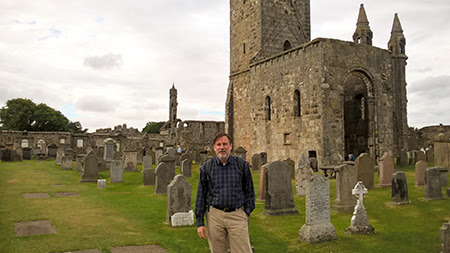 Those are the ruins of St. Rule's Church behind Stan - on the same grounds.
The best view the cathedral offers is for those who have already passed. 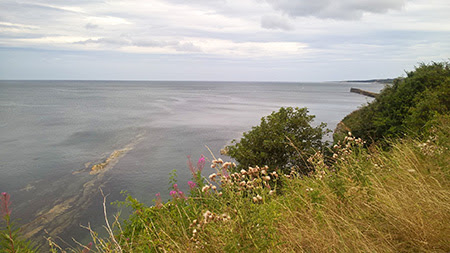 They still bury people there - especially golf legends. This was a very modern looking shrine in the graveyard to "Tommy" - son of Thomas Morris. 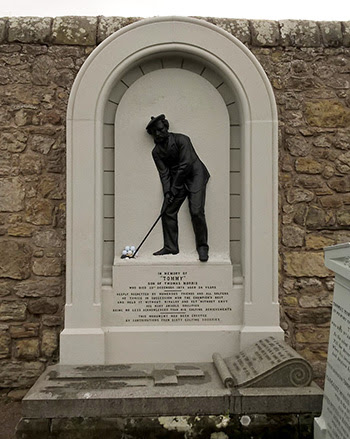 I know nothing about golf, so apologize to those who do. There were a lot of people who obviously loved and respected Tommy. Today's visitors leave golf balls and tees on his memorial - they aren't an official part of the structure. Click the image to see it larger in a new window.
Walking around the cathedral is free and probably one of the most impressive things we've seen since moving to Scotland.
Down the road is the St. Andrews Castle. 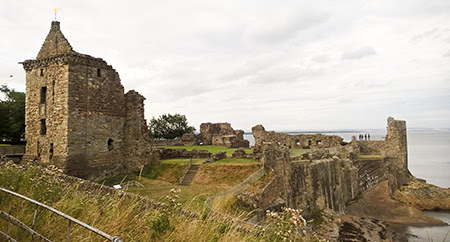 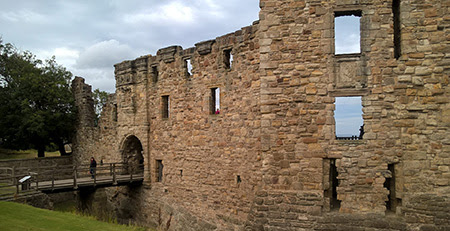 The castle was also built in the 1100s by Bishop Roger as his official residence. If we'd seen it first, we would have been impressed, but after the Cathedral, it looked so small. That said, a lot of the impressive parts of the castle are underground, like the Bottle dungeon and such. It wasn't free to see, and we're not so into old torture chambers, so we passed on that one. From there we wandered into town to just see what we could see...
at September 10, 2016

Ok, definitely jealous. I really should have done the torture chamber for research.
Thx for the virtual tours of those places we never got to (we were obviously too busy checking out every pub in Edinburgh)...

The pubs are important too! :) e

Being married to a golfer who's been over there, it was nice to get a virtual tour of St. Andrews. I've heard so much about the place, in reverent tones, and it really deserves all the admiration, plus I just fall in love with all the old, historic buildings over there.

Mimi, yeah. I imagine I missed much of the significance of St. Andrews since I'm not a golfer. It seems a bit like Mecca for them. :)