Melissa and Dining in Edinburgh!

We have been so thrilled by the friends who have come through Edinburgh while we've been here. Some we just have drinks with as they pass through, some we spend the day with, and some have come to stay with us specifically, like Melissa Libby.
Melissa is a restaurant promoter from Atlanta, so we knew her visit was going to be all about FOOD! The hardest part of her visit was figuring out the places we absolutely had to share with her. There are so many fabulous places to eat in Edinburgh including FIVE Michelin Star restaurants! I think we did a pretty good job though. Care to drool?
We picked up Melissa from Waverly Station in the afternoon and decided to begin the binge-fest at the Educated Flea.
This is the third restaurant in a series, the first being The Apiary (bees do it), the second is the Three Birds (birds do it), and the latest, the Educated Flea (even educated fleas do it). We've eaten at all of them and absolutely adore their creative cuisine. Our meals were inspired and a great kick-off. Melissa had the stuffed squid. (All food images © Melissa Libby.) 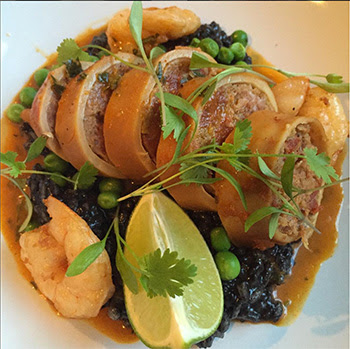 The next day we began the morning as a local. We walked around Stockbrige... 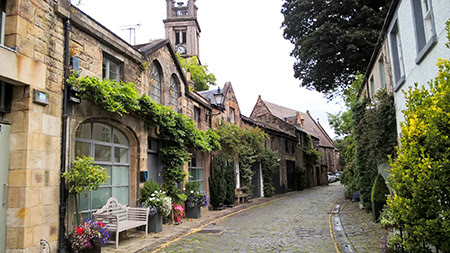 along the Water of Leith to Dean Village... 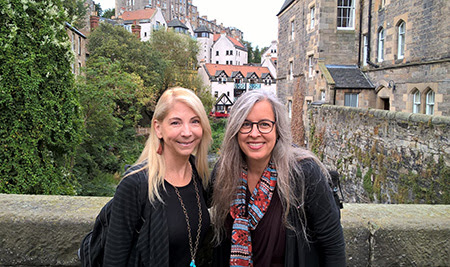 and ended up at Hectors, where Melissa had her obligatory fish and chips. 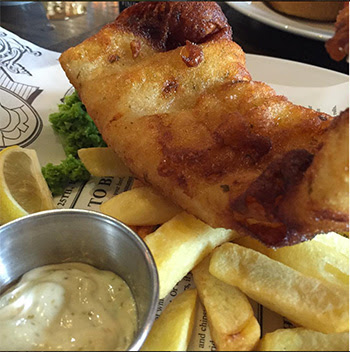 Happily, I had a meat pie!
Side note... I'm to be tested for celiac soon. In the interim, my doc has asked me to come off my gluten free diet (which I've been on for about 5 to 6 years) for a month so that I can test correctly. Stomachaches aside, I am in heaven eating everything I don't usually get to eat - just in time for Melissa's visit!
After lunch we did the more touristy side of things - a walking tour of Edinburgh. I've come up with a good path that hits the highlights: George Street, Rose Street, and Princes Street in New Town, then the Royal Mile, Grassmarket, the University, the Meadows, George Herriots (Hogwarts), and Greyfriar's Bobby in Old Towne. That evening we attended the Scran Salon - a meeting of foodies hosted by food critic, Blythe at Akva at the head of the canal. Melissa had a blast talking BBQ with a local chef - Toby. 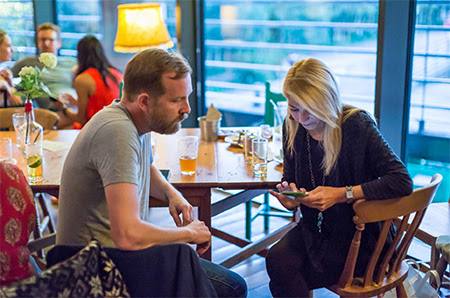 Chris Scott took that photo and this one of me and Stan, which I adore. 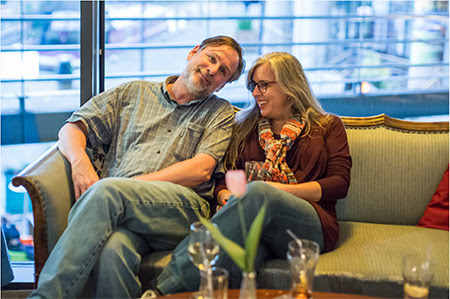 All over town is a hike - we probably did about seven miles that day. The reward was a "fruit-de-mer" at Fisher's on Thistle Street. Melissa's face says it all. OMG. 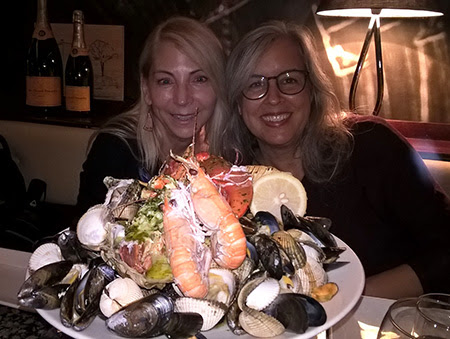 It was a nice day of contrasts - exploring the locals paths, the tourist paths, the uni paths. She got a peek at an awful lot of life in Edinburgh.
The next day we starved ourselves (ha!) in anticipation of lunch. Now, not all of our guests take us to Michelin-starred restaurants in thanks for staying with us, but that's what Melissa wanted to do, and we were so grateful! The one we chose? Martin Wisharts in Leith. 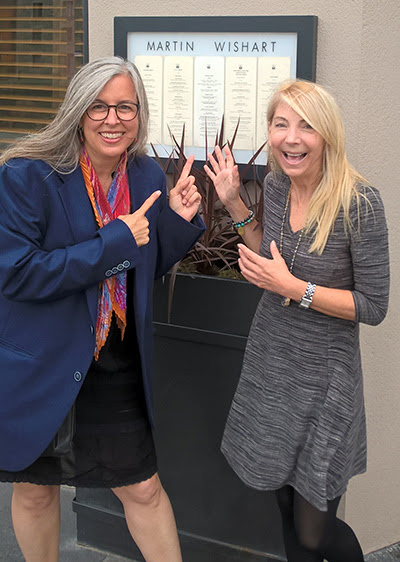 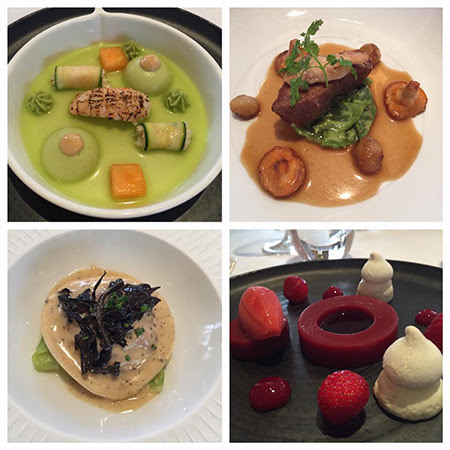 It was AMAZING and we leisurely enjoyed our three-hour feast.
Before and after that once-in-a-lifetime meal we walked around Leith. 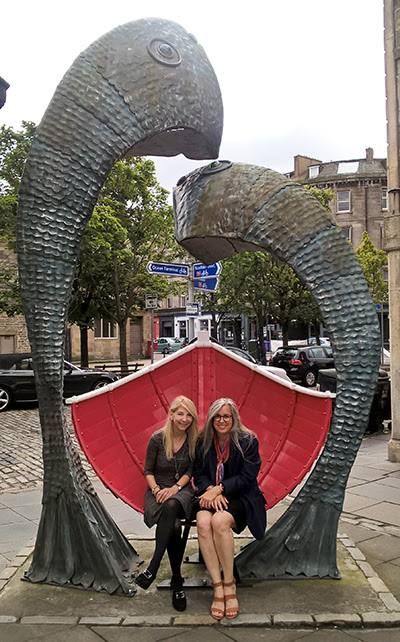 Please notice our shoes as we changed into them especially for the restaurant. We call these 'taxi shoes,' as in, 'if you wear these shoes, you have to take a taxi.' Otherwise, we were carrying a swap of cumfy loafers to wear for the long way home. First, we walked past the other Michelin-starred restaurant in Leith - Kitchin. 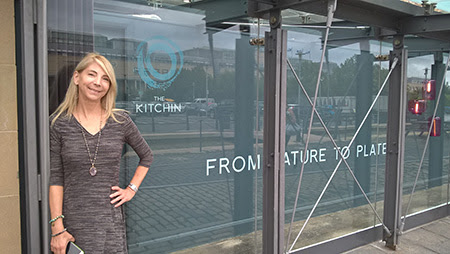 Then to Newhaven, the old fishing port. We dropped into the fishmongers...

And ogled over the lighthouse. 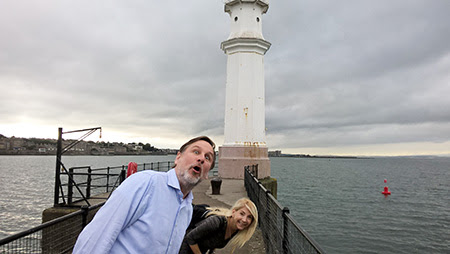 We walked home past the garden allotments, where we saw an enormous fox running through the gardens, gobbling up whatever he could find. No pictures of that, unfortunately.
Back home, Stan made a gentle soup for dinner, which I couldn't eat. I fell over - completely shattered.
But we had one more day for gastronomic delights. For her last morning, we took Melissa to Treacle for a true Scottish Breakfast, which consists of sausage, bacon, haggis, black pudding, flat mushroom, tomato, hash browns, beans, egg, tattie scone, and toast... with coffee or tea. 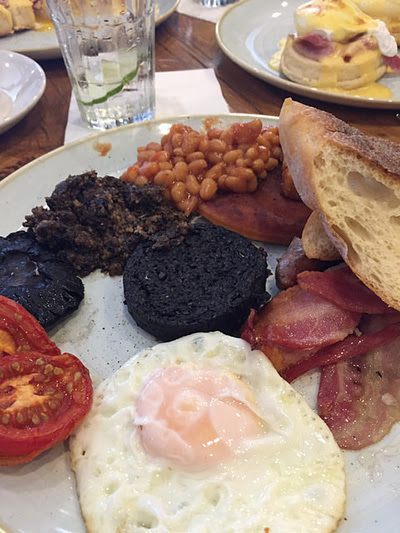 Here's Melissa before the haggis... 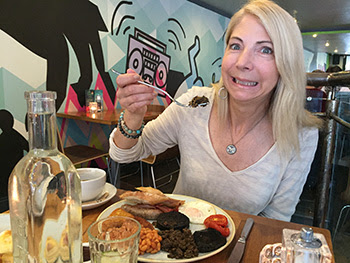 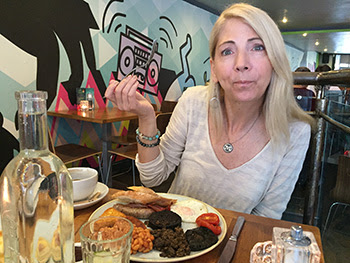 She thought it was okay!
Personally, I genuinely like haggis. It is the ultimate comfort food.
We had such a great time with Melissa doing what we all love to do best - EAT. Now she's off to London for the next part of her adventure, and we are on a diet of lettuce leaves with lemon juice for the next month... *burp*
at September 12, 2016

Most delicious trip ever!!! Love the recap! xoxo

Oh good! I wanted to slip more of your photos in, but haven't had a chance. You're a much better photographer than I am! SUCH a fun trip, we LOVED having you!!! Hugs, hugs, e