Creators Interview for STAND UP AND SING! 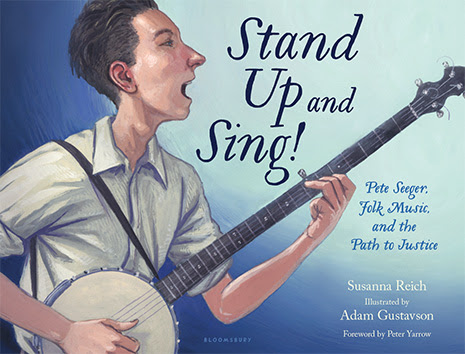 Susanna: Hi, Adam. Stand Up and Sing! is the second nonfiction picture book we've done together. I knew from your work on Fab Four Friends that you do meticulous research and are very knowledgeable about musical instruments. Pete Seeger's story required not just accurate visual representation of banjo, guitar, piano and violin, but also a 1930s microphone, a 1940s car, a 1950s bus station waiting room, a 1960s TV camera, a log cabin, the sloop Clearwater under construction and under sail, period clothing for almost every decade of the 20th century, and a protagonist who ages from toddler to old man. Not all of these were in the text; some came out of your imagination. What goes through your head when you're first imagining images to go with the words, and at what point do you get into the historical research? Do you sketch out each spread first and then fill in the details? 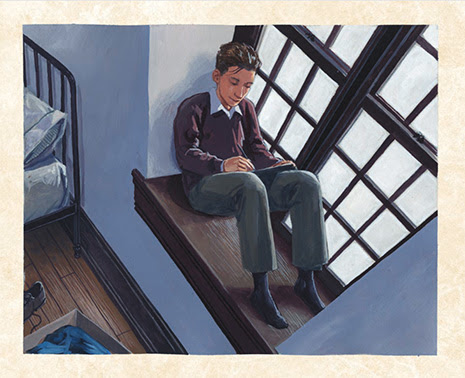 Adam: Hi, Susanna! I do a lot of bouncing back and forth on the research and the drawing, but for a project like this I always start with the research.
I spend a month or so just digging up as much as I can from any given time period, until I feel like I’m thinking in a foreign language. Different subjects have what I like to call different visual potential. Clothing from the '30s makes different shapes than clothing in the ‘60s, and different musical instruments and their silhouettes drive the direction of a picture in ways that aren’t all that flexible (if the banjo player is right handed, and we want to see his face, there’s only one direction the instrument neck can point in). The research includes period photos, fashion ads, art and illustration from the era, old movies, and lots of eBay searches. I try to remember that the past is a lot like the present in certain ways; if someone was making a book about me in 2017, almost nothing surrounding me would be from 2017. The couch might be 10 years old, the piano 50 years old, maybe there’s a new table lamp… a scene set in 1933 will follow a similar pattern.
From that point, once I know what I want a picture to look and feel like, I go on a fact-checking mission, searching for details. What year does Pete’s banjo gain a few extra frets? Exactly when does he grow that beard? What stage of ship building has the best shapes, and where would Pete be visible working on it? At some point, every inch of a picture has to be a decision, and so if it needs detail, the detail might as well be obsessively accurate. As the drawings become more developed (and as the paintings get started), more questions just keep arising.
My first question for you is also research oriented. Biographies and non-fiction, in general, can be tough to find a story arc in, because the plot has already actually happened, and coaxing it into a respectful narrative while establishing major themes that you, as an author, might want to communicate, must have its ups and downs. When you began this project, how familiar were you with Pete Seeger’s life, and to what degree, if any did your research change what you thought your story would be about? 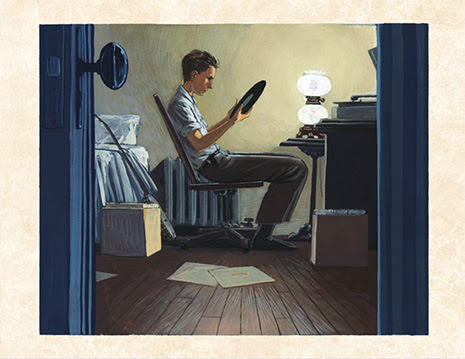 Susanna: Great question. I actually find biography easier to write than fiction, because the plot is a given and all you have to do is find the narrative arc. Of course, that's easier said than done. Not everyone's life lends itself to a good story. When I'm considering a subject for a biography, I won't proceed with the project unless I can find that arc, with its touchstones and connecting threads.
Stand Up and Sing is a "cradle to grave" biography, so the challenge was to find out what forces shaped Pete as a young person and how he responded to and expressed those influences in his art and life. I hadn't known anything about his family background and discovered that both his parents were musicians, and that his father and stepmother's politics and interest in folk music had a profound effect on him in his formative years, as did world events (the Depression, the union movement, the rise of fascism in Europe). After that, his personality, beliefs and behavior were quite consistent throughout his life. His dual commitment to music and activism never wavered, though of course, he had his struggles.

Speaking of struggles, I'm curious to know what aspects of illustrating this story were particularly challenging for you.

Adam: Well, the cradle to grave biography has a few of its own built-in challenges. Instead of a main character who goes on a day-long adventure, there’s a main character who ages (and thus has to change their clothes) from page to page. The handling of likeness over the course of 90+ years in this case—while maintaining consistency and recognizability in keeping with available photo reference—can be dicey. However, that wasn’t the most challenging part. Pete Seeger, as it turns out, looked at every phase of life like the kind of person I might draw anyway. It really came down to his decision to build a giant sailing boat, the sloop Clearwater, two thirds of the way through the story. That was a challenge.
On a side note, though, I did get about halfway through the book illustrating it with 30 inch wide oil paintings, and decided that they felt too heavy, too full of some sort of abstract gravitas, for the subject. So I began the entire series of finals for the book over in gouache on paper (an opaque watercolor paint), and I think the directness of the medium was a much better fit for the tone of the story and our modest and plainspoken subject.

My last question may be a little bit along the lines of the last one. Our previous title together, Fab Four Friends, tells the story of the Beatles from their individual childhoods to their first British #1 hit. The lives and careers of the members of the Beatles are exceedingly well-documented, and they’re ubiquitous in our pop culture. Pete Seeger is by no means obscure, but just between belonging to an older generation and being a folk musician and activist, documentation, analysis, and photography of him are nowhere near as exhaustive. How would you compare writing about these two different types of subject? Are there benefits to one over the other, a subject where written and visual evidence is plentiful vs. one that requires more searching and perhaps even some gaps? 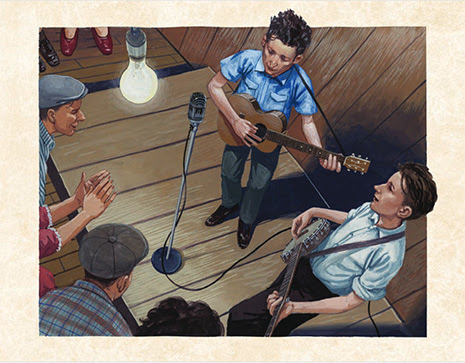 Susanna: It's true, the Beatles are so well-documented that you could spend years just reading books and articles about them, never mind the material in other media (music, film, photography, etc.). How do you decide which to use? You have to familiarize yourself with the resources, sift through them and evaluate which are the most important and reliable.
I look for authors who are well-respected and well-reviewed, or those who have first-hand knowledge of the subject, like close family members. I can usually tell pretty quickly by the quality of the writing (and the bibliography and footnotes, if they exist) whether a book is worth my time. Fab Four Friends focuses only on the boys' childhoods and the early years of the band, so I didn't have to become an authority on the entire history of the Beatles. Ask me a question about the early years, and I'll probably know the answer, but I know no more than your average fan about what happened after 1963.
With Pete, while there are far fewer books written about him than about the Beatles, there was no dearth of material. He recorded scores of albums and was a prolific writer, and there are several biographies and plenty of articles, letters, photographs and films (both biographical and performance documentaries). There are even biographies of his father, Charles Seeger, an important musicologist, and his stepmother, Ruth Crawford Seeger, a composer and folklorist.

If all this research sounds dry, it's not. It's like digging for treasure. And I never forget that I'm writing for kids. I'm always on the lookout for interesting details and fun quotes. And when I sit down to write, I try to use language that conveys the personality of the subject and the flavor of the times they lived in. 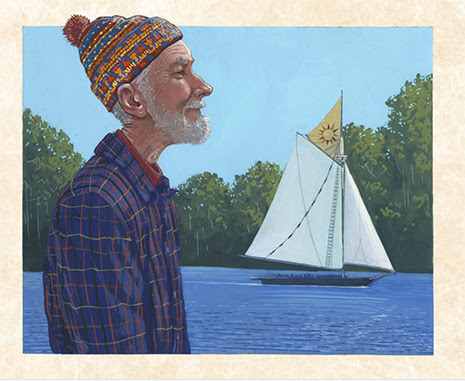 Adam: Hey! It’s been great chatting with you about all this behind the scenes stuff. Thanks for initiating the conversation; it’s always interesting to get a glimpse behind the curtain of someone else’s creative process.
Susanna: You're welcome. Thanks for sharing your thoughts!
e: Thank you both for stopping by!
at May 18, 2017