Rowboat visited back when his debut picture book came out, PETE NO PANTS, in which he proved to be a creative thinker with some out-there ideas about picture books. For more proof, I've invited him back to talk about his latest picture book, MOST MARSHMALLOWS (made with actual marshmallows). Prepare for a treat! (No pun intended!) 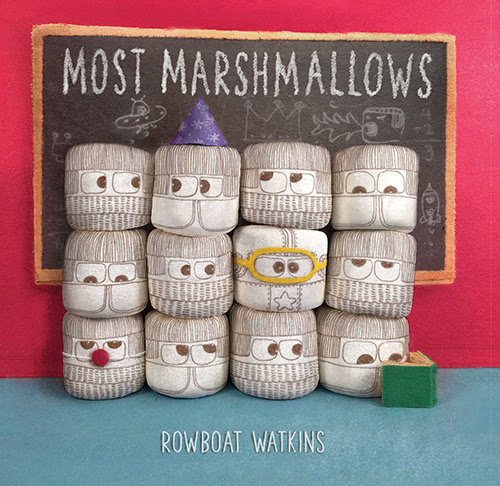 e: Hiya Rowboat - welcome back! What was your creative process/medium for MOST MARSHMALLOWS, can you walk us through it?
Rowboat: I'm normally just a drawer and pretend watercolorist when it comes to making pictures for books. But for this book, I decided to try something new…and hopefully fun. Because sometimes making pictures for books can not feel like fun. To me. I don't know if you ever feel that way about your own picture making, Elizabeth, but I sometimes find myself slipping into some sloggy headspace where making pictures feels over-thought , and over-worked, and onerous, and full of rigor mortis. And those kinds of work-y pictures usually aren't any more fun to look at than they were to make. So I'm forever trying to remind myself to have fun…and relax. Without being one of those annoyingly unrelaxing kinds of people who is always telling other people to RELAX too much. Which…I am sorry to say…I often am. With myself. But I'm working on it. Relax…. See?
Anyway, a few years ago, I was taking goofy pictures of little dioramas I had been making out of construction paper and cardboard and marshmallows, and acorns and little sculpey figures. For no good reason. I was just making these pictures for myself, and sometimes posting them on instagram or e-mailing pix to friends. Just to have fun. At the time I was also trying to write a story about marshmallows. A story that wasn't really going anywhere, but I felt like there was a story there even though it all mostly felt like a meaningless mushy mess. Then suddenly, one day, for no good reason, it occurred to me that maybe I should make the pictures for this meandering marshmallow story out of the pointless photos I'd been taking of the dioramas, instead of drawing the pix as I'd been planning on doing. Once I started to think about what kinds of things would be fun to build out of paper and cardboard and marshmallows, I started to notice the structure of a story falling into place.
The dioramas were all made with things lying around my house, and arranged on my desk, and lit with desk lamps, and photographed with my phone. I wanted to keep everything as unofficial-feeling as possible in order to minimize the chances that things might start to feel too work-y or precious. The hardest part for me was learning how to light the scenes. Because I am not a photographer. And I have no idea how to light things. But I slowly developed a system as a worked my way through the spreads. And I was pretty good about remembering to have fun…most of the time.
ROCKET: 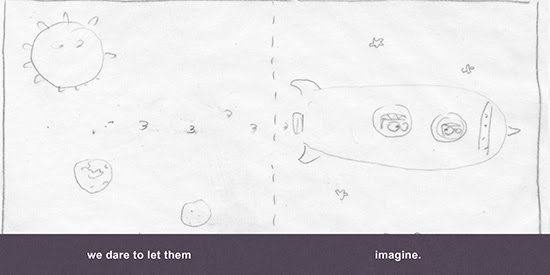 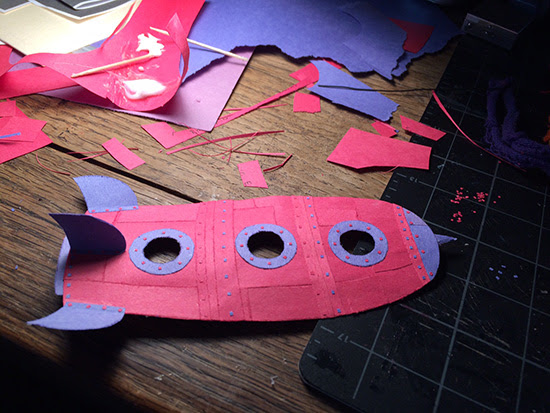 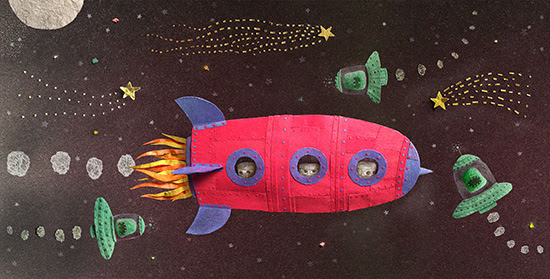 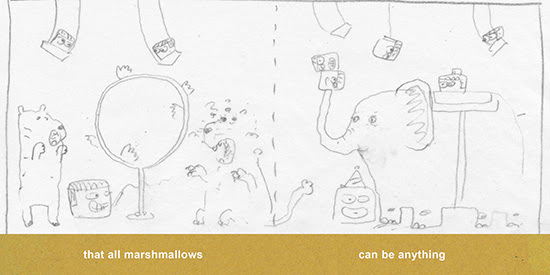 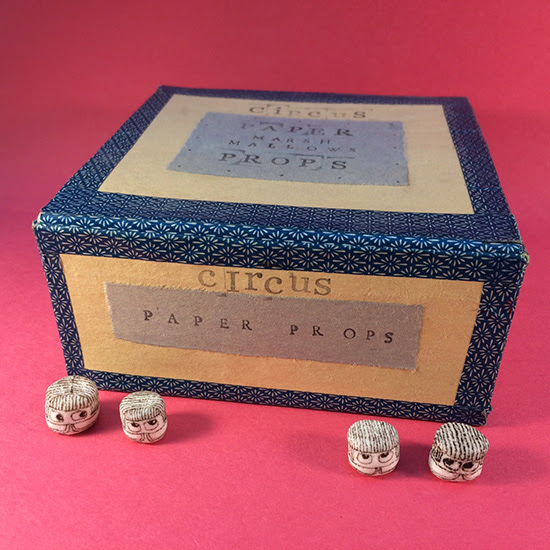 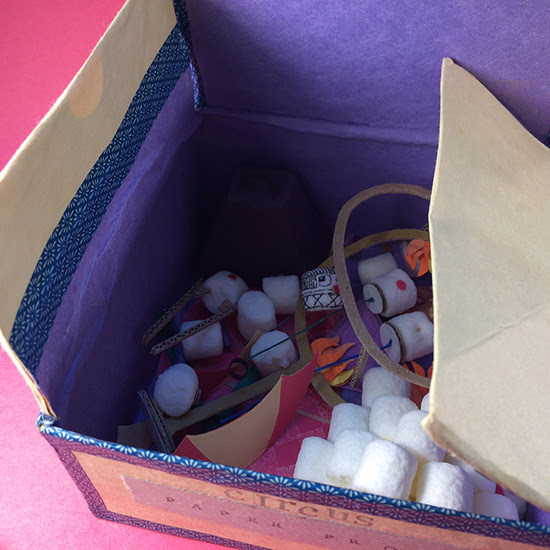 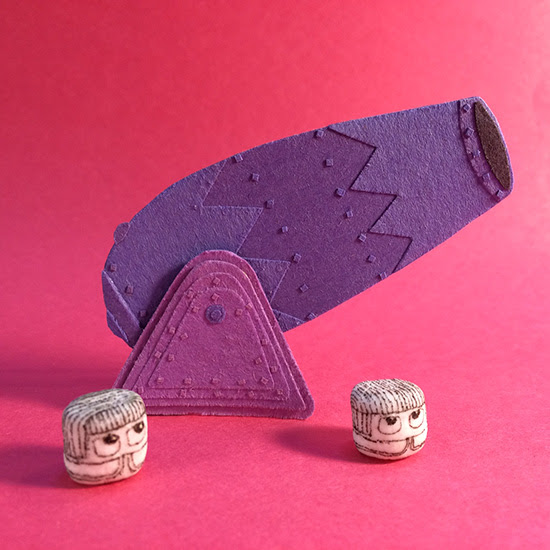 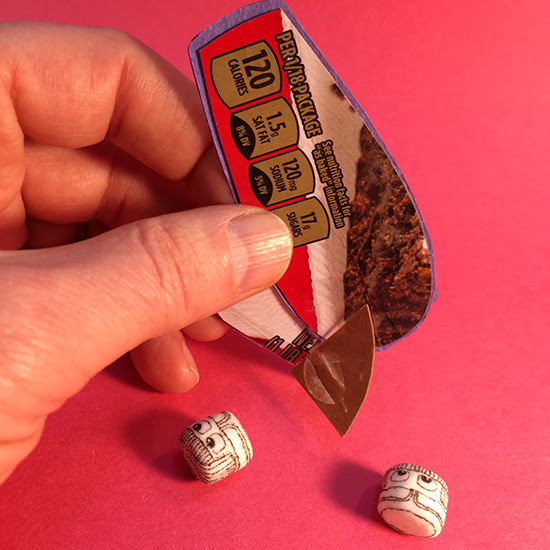 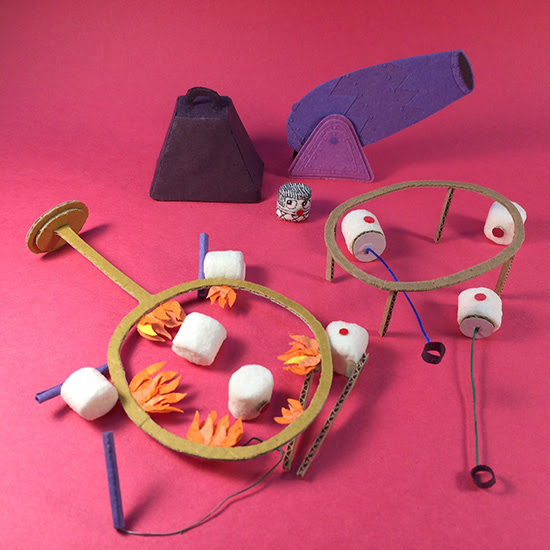 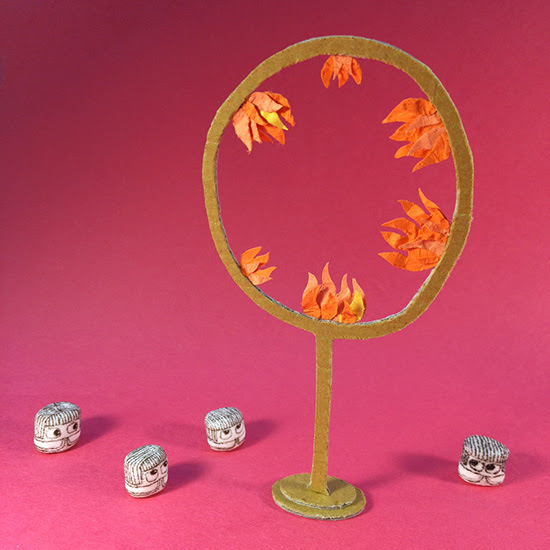 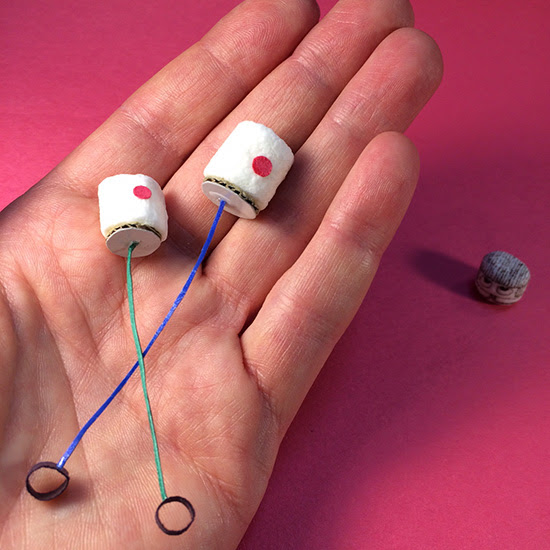 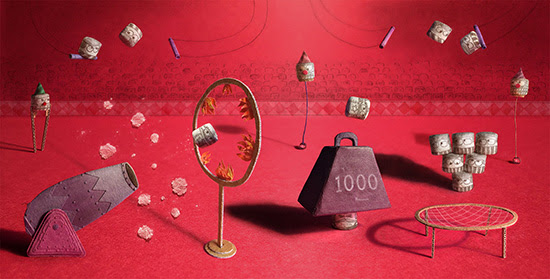 e: Is there a unique or funny story behind the creation of this story (other than the obvious)?
Rowboat: The idea for this book started off as a story about a poodle. Or, more specifically, marshmallows first appeared in a dream in a story I'd been trying to write about a poodle who was being bullied at school. The poodle story wound up not working, but for whatever reason I kept drawing marshmallows in my sketchbook. And then one day I started to wonder why I was always drawing marshmallows. Then I wondered what marshmallows might dream about if marshmallows had dreams. If a poodle in a story that doesn't go anywhere can dream about marshmallows, why can't a marshmallow in an idea that isn't going anywhere dream about a poodle? Right? So it was a dreaming bullied poodle that I have to thank for the creation of this story. Which means I probably need to thank my real alive dog. Because she is a poodle. And I probably wrote the poodle story in the first place because of her. Since I never thought about poodles before her. Or marshmallows. I don't really even like marshmallows. Although, to be fair, I also used to think I didn't like poodles all that much either. And it turned out I was wrong. Which is usually the case. 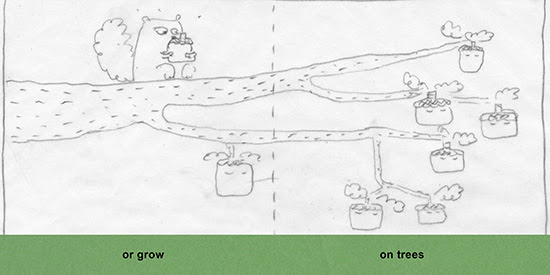 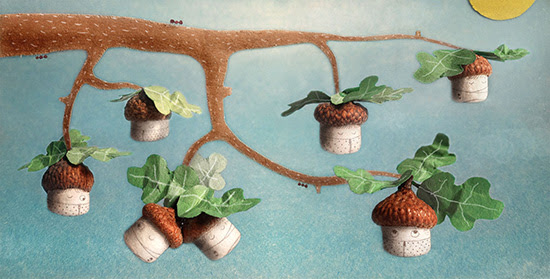 e: What was your path to publication?
Rowboat: I spent years writing stories about literal and figurative poodles that didn't go anywhere, other than into folders on my desk. But one of the other dreams my bullied poodle dreamed about was 'rude cakes who kicked each other on purpose, and never said sorry." Like I said, that poodle story never quite worked, and I have no idea why he dreamed about rude cakes or marshmallows (I seriously doubt my real life poodle dreams about either of these things), but it was the poodle's dreams that lead to the marshmallow book, but it also lead to the first story of mine that Chronicle decided to acquire five or six years ago, which was called Rude Cakes. So my path to publication is largely a function my stealing dreams from an imaginary poodle. I'm not proud of it. But at least you know the truth. 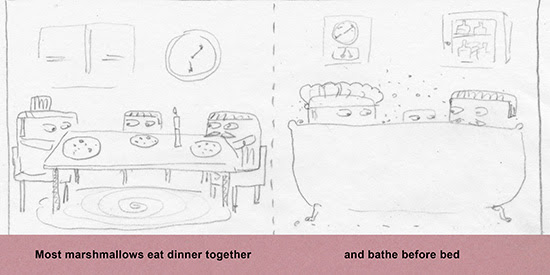 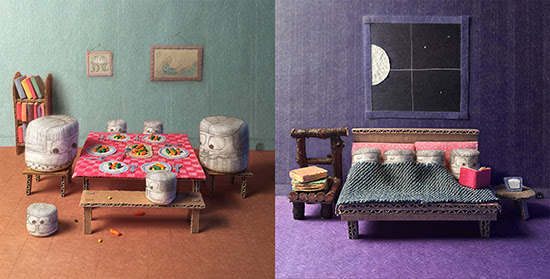 e: What do you think makes an illustration magical, what I call "Heart Art” - the sort that makes a reader want to come back to look again and again?
Rowboat: Generosity. I don't know exactly what that means, but I think this is where the magic hides. I think that it (generosity) means lots of things, but it requires a kind of selflessness on the part of the illustrator, which lets the viewer/reader engage directly with pictures without having to think about the illustrator at all. Again, I'm not quite sure what that means. But it sounds right. And it's the word that always comes to mind whenever I see illustrations that make my eyes dance + my knees feel buttery.
e: Nice! 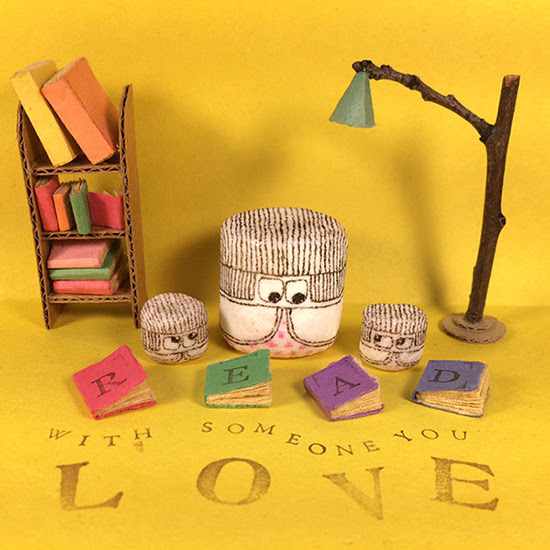 e: How do you advertise yourself?
Rowboat: Very poorly.
DINNER (the food is cake sprinkles): 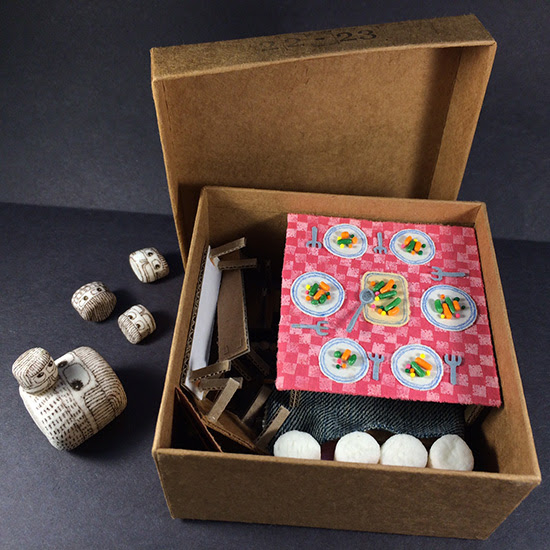 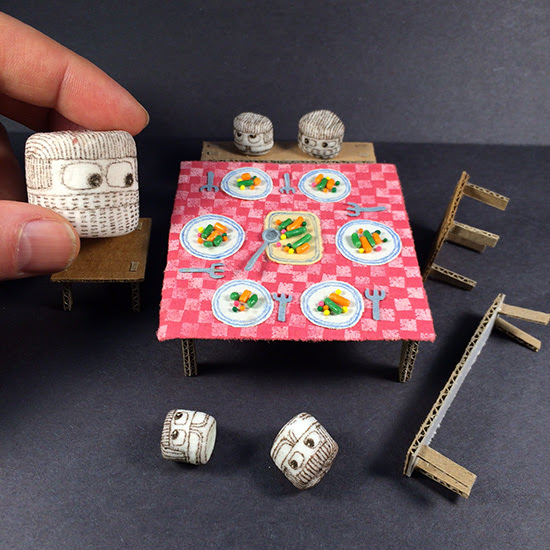 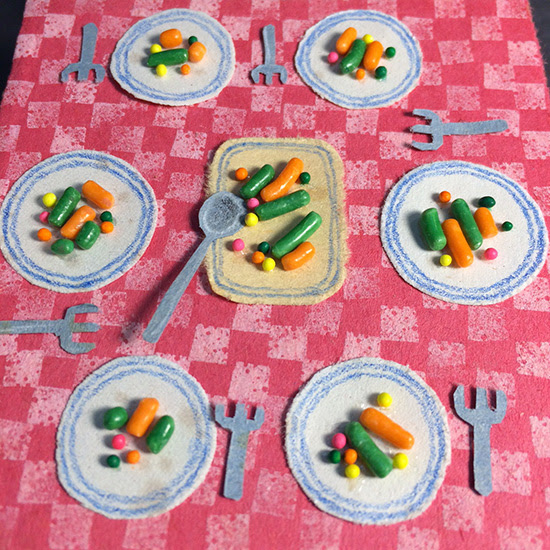 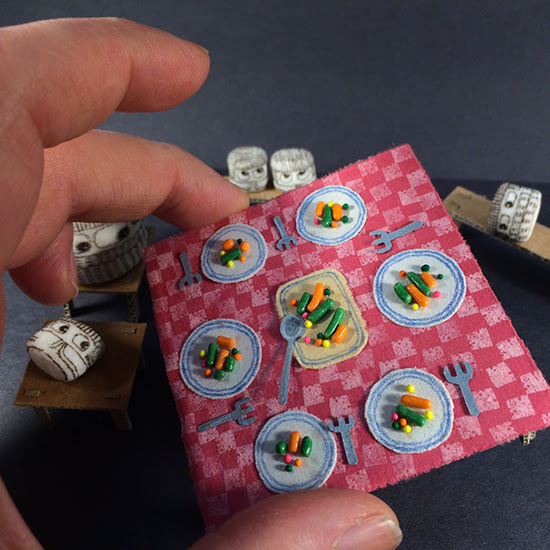 e: What is your favorite or most challenging part of being a creator?
Rowboat: It is hard to remember to have fun. Seems like the easiest thing in the world. And sometimes it is. But it's also the easiest thing to forget. Getting to make picture books as a grown-up is a dream my poodle-y little brain would've scarcely imagined possible when I was just a puppy. But sometimes life throws you a bone, and it's up to you to figure whether it's a boring bone, or an Amazing Bone.
PRAM: 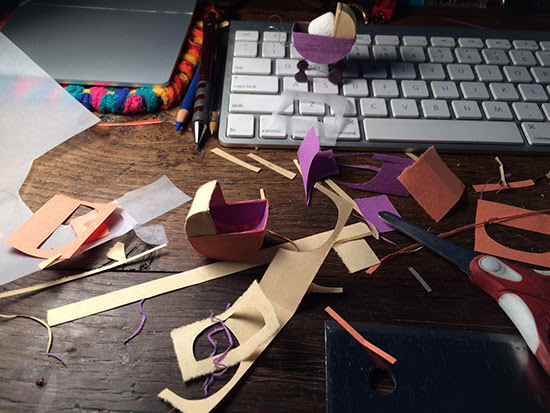 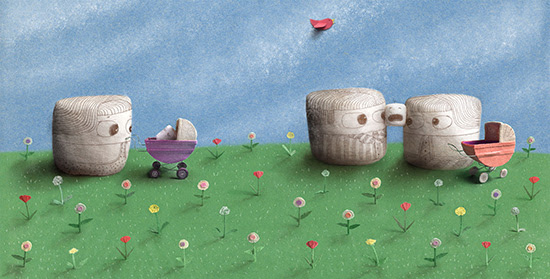 e: Is there something in particular about this story you hope readers will take away with them, perhaps something that isn’t immediately obvious?
Rowboat: Question Authority! That's the secret (potentially subversive) message of the book. I'm all for marshmallows dreaming big. But what I've always most liked about this seemingly sweet story is that the book ends with a marshmallow doing precisely the thing it was told earlier in the book not to do. I am not that kind of marshmallow, myself. But my daughter is. And while I may find this boldness exhausting as her dad, I think it is something that will serve her well throughout her life. The world needs more marshmallows like that! 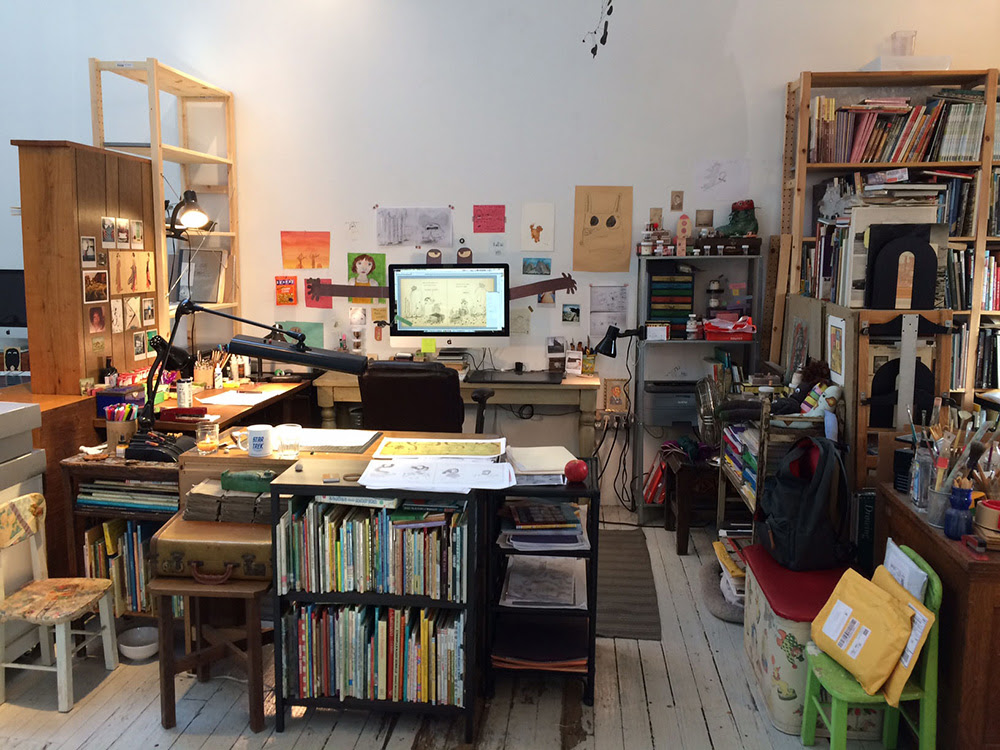 e: What are you working on next or what would be your dream project?
Rowboat: Right now I am working on the pictures for book about squirrels. But the squirrels aren't helping.
STUDIO (shared with Sophie Blackall, Brian Floca, and Doug Salati)
Click the image to see a larger version.