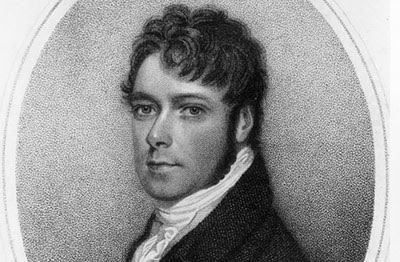 There is a holiday here in Scotland called Burns Night in celebration of the birthday of the National Poet of Scotland Robert (Rabbie) Burns (1759-1796). Burns suppers began in 1801 and are still going strong today.
Chances are you've heard of Rabbie Burns and didn't realize it. He wrote the famous poem Tam O Shanter and Auld Lang Syne - yes, the one you sing at midnight at the turn of the New Year. He also wrote the famous line, "The best-laid plans of mice and men often go awry" in his poem "To a Mouse." It was later used by John Steinbeck as the title of his novel.
Rabbie Burns celebrations have been going on for over a week now. His face is everywhere in Edinburgh. And haggis, neeps and tatties are on sale in the grocery stores (neeps=turnips; tatties=mashed potatoes).
Stan was invited to a very formal Burns Supper last week. He had to wear a dinner jacket and women weren't allowed. (Kilts and whiskey were involved.) A traditional Burns supper consists of traditional Scottish Food, such as Scotch Broth (lentils and root veggies soup) or Cock-a-leekie soup (chicken and plums), and of course (you knew it was coming), the haggis: 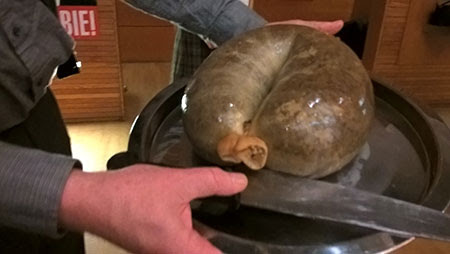 It is presented with pomp and a prayer called "The Selkirk Grace" (or "Burns's Grace at Kirkcudbright"):

And then it is stabbed indelicately with a large knife.
Haggis is typically not gluten free, although sometimes it is. (It is made with oatmeal.) I have had GF haggis and I can tell you honestly, I sincerely like it. It's a comfort food and I understand why it has remained popular. That said, an any-time haggis is usually much smaller than this, more like a large sausage. This one was most definitely for show at the Burns Supper Stan and I attended together this Sunday.
It was held at the Scottish Storytelling Centre where my friend David Campbell and his former wife Linda gave a lovely performance about Rabbie's life. (He was quite the rogue and songwriter - a true character.) 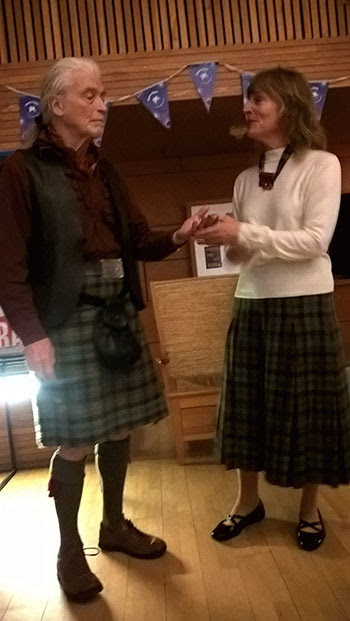 To cap off the evening, Donald Smith, head of the Scottish Storytelling Centre, performed the entire poem, Tam O Shanter in Scots. I have a feeling I have now seen it done at its very best and other performances will pale in comparison. He was fabulous!
All said, Burns Night has been a fun addition to our Scottish experience and I'm happy to join in to sing the bard's praises.