Rather than talking about what I want to do in 2016, I'm embracing what Julie Hedlund calls the "Anti Resolution Revolution."
As she says, "Let’s first celebrate success and then determine how to carry that forward into the New Year rather than berating ourselves for what did not get done."
I also like what Joe Jacobi (Olympic Gold-medalist) says in his article "Don't Be A Goalie - Why Goal Setting Doesn't Work For Me":"The problem with goals is that you focus on what you don't have now. The skinniness you don't have now. The increased income you don't have now. The freedom you don't have now. The friends and relationships you don't have now. The life you don't have now.
That's too much "don't have now" and a complete energy suck away from what you DO HAVE right now.
Goalies block shots. I want you to take shots. Shots on goals. Shots that score momentum, not points."
With all this in mind, I am not setting any new goals for this year. Instead, I'm focusing on goals I've already accomplished. I recently found a list of goals I wrote for myself when I was about 25-years-old. I keep it in my personal treasures box. I was amazed at how my goals haven't changed. And while it took me a little longer to achieve them than I'd hoped, I've checked almost everything off of this list. Here is it: 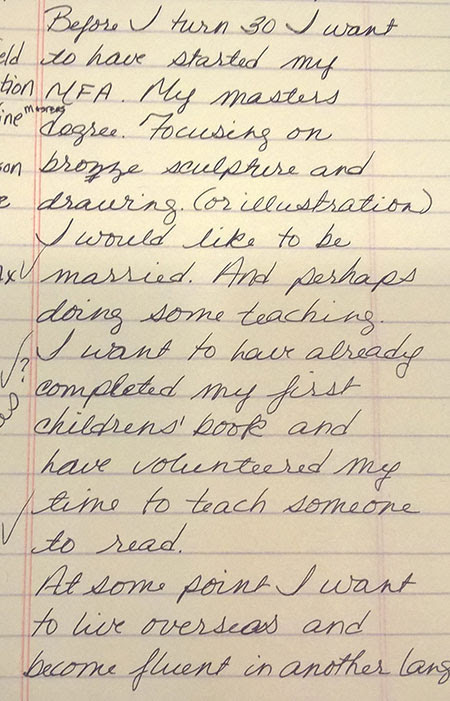 I've begun my MFA in Illustration. I'm married to an awesome man. I teach in the MFA in Writing and Illustrating Children's Books program at Hollins University (Virginia, US) every summer. I have over two dozen books published. I volunteered for an adult literacy program in Chattanooga. And I now live overseas in Scotland! I'm not fluent in French or Spanish yet, but I'm working on it and getting a lot of practice in this multi-cultural city. So, just like my other goals, I sincerely believe it's just a matter of time.
Pretty cool, eh?
at January 04, 2016

Yes. Pretty cool. I need to assess myself now. I'll get back to you!

I'm betting you've checked off a lot of your goals too, Kitty! Hugs, e