Interview with Rex Stephenson on The Jack Tale Players

I have something a little different for you today, dear readers - an interview with playwright Rex Stephenson!
My friend Tina Hanlon is an Associate Professor of English at Ferrum College, occasional Lecturer at Hollins University, and expert on Appalachian Folklore with a concentration on Jack Tales. So it seemed appropriate to hand the reigns to her today as she interviews the creator of THE JACK TALE PLAYERS - a theatrical group performing Jack Tales since 1975, that just celebrated their 40th birthday! Enjoy!

Tina: Did any experiences while you were growing up in Indiana influence you to become a playwright, actor, director, and teacher all rolled into one?
Rex: Luckily for me, I grew up with two grandfathers that were both wonderful storytellers and I could spend whole evenings listening to them recount tales of their youth.
I wrote and directed my first show when I was in the 4th grade. It was a puppet play entitled, I think, “We Are All Here.” I’ve never forgotten the girl who improv’d instead of following my script. It was then I learned the value of being an autocratic director. I didn’t write another play until I was in college at Ball State University, where I imitated Rod Steiger’s style and wrote something about a Civil War soldier.

Tina: How did you get started dramatizing Jack Tales? 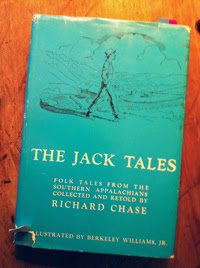 Rex: When my daughter Janice was in the 4th grade, she brought home a copy of Richard Chase’s Jack Tale book and wanted me to read it to her. I recognized the value of these stories and believed that Virginia children should be exposed to these stories of their culture. I went searching for scripts and could find none, so I wrote a grant to the Virginia Commission of the Arts to allow me to research and dramatize these wonderful stories in Virginia. I’ve been doing that since Dec. 11, 1975, performing with more than 400 college students and professional actors.
Because Chase’s publisher was reticent about allowing me to adapt his tales, I searched the Library of Congress and then luckily, discovered the lost Virginia WPA files in Wise County, with 13,000 typed pages of southwestern Virginia folklore. Some of them are the same tales Chase collected and edited. These resources have allowed me to publish a number of scripts of Jack Tales that have enjoyed more than 3300 performances, all over the United States and in several other countries.
Here is Rex Stephenson with Richard Chase when Chase visited Ferrum College as a consultant in the late 1970s. 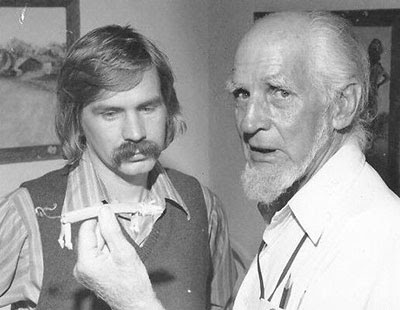 And with one of his performers and Anne Chase, Richard Chase's daughter, performing at Hollins University in 2012 (which I attended). 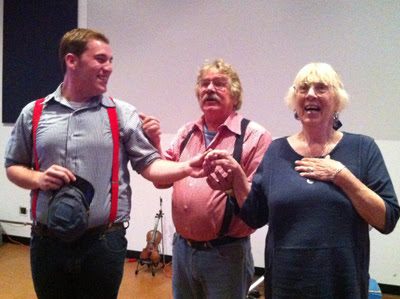 Tina: Why did you start branching out to tales with girls as heroes?

Rex: My colleague Tina Hanlon [YOU!] encouraged me to look at Appalachian tales with young girls as the driving force of the story. I first dramatized “Ashpet” (the mountain version of “Cinderella”) in 1998 and then later adapted “Mutsmag.” Both these tales were resounding successes with young audiences and teachers. They have been published together in a play about storytelling called Grandmother Tales. Another story in the same vein is “Catskins,” which utilized actors’ bodies for scenery in a way that surprised even me.
I like these tales because a father of girls is always interested in strong female characters. You hope all your kids would turn out like Mutsmag, would stand up to people and make right decisions based on what they want out of life rather than what is expected of them. 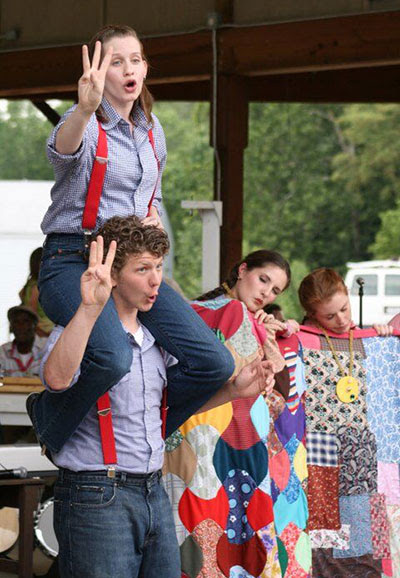 Tina: Why would Elizabeth’s new friends in Scotland be interested in the tales you dramatize? Where did these Appalachian folktales come from?
Rex: The Jack Tales, while truly American, trace their origins to the British Isles as well as the Grimm Brothers. Excellent examples of Scottish Jack Tales are found in Duncan Williamson’s books, such as Jack and the Devil's Purse. “Mutsmag” has roots in Scotland in tales known as “Maol a Chliobain” and “Molly Whuppie.” 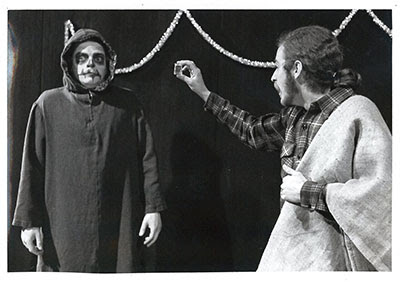 Jack sees Death threatening the princess, in a televised production of "Soldier Jack," about 1980. Dean Gates, the student playing Death, won an Emmy for his makeup work for Star Trek later in his career.

Tina: What is one of your most memorable experiences with dramatizing folktales?
Rex: When I first started to book the Jack Tales, many principals were reticent about having Appalachian folklore in their schools, saying that the children don’t need to see a bunch of hillbilly plays. So I had to prove to administrators that these wonderful stories of a young man taking on challenges, and through his quick wit and dumb luck always succeeding, had a value far beyond what they expected. We originally played shows in the round, seating children on the floor with four aisles for us to make our entrances and exits. In the first couple of shows, I noticed the children were so excited that they closed up our aisles in their enthusiasm to get close to the action. It was then that I knew I had a hit. After a Richmond reporter printed an article with the headline “Simple Jack Tales Educate,” I had no trouble booking shows. 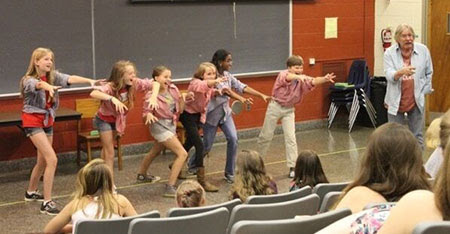 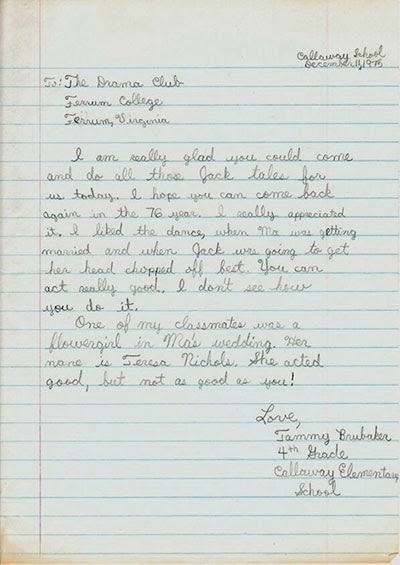 Tina: What else have you written besides folktale dramatizations?
Rex: While I started scripting Jack Tales, I later wrote history plays and adapted many well-known classic novels for young people, including Treasure Island, Tom Sawyer, and A Connecticut Yankee in King Arthur’s Court. I have published 25 scripts that are available from Eldridge Plays and Musicals, Dramatic Publishing, and Leicester Bay Theatricals. 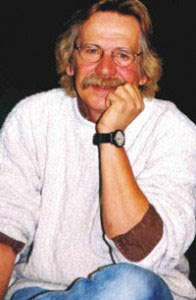 R. Rex Stephenson earned his Bachelor’s degree in middle and secondary education at Ball State University. Upon graduation, Stephenson taught at Bayshore Middle School in Florida and Redkey High School in Indiana. He received his M.A. from Indiana State University in theatre and later accepted a position as drama professor at Ferrum College in Virginia. In 1984, he received his Ph.D. in educational theatre at New York University. Stephenson has had 25 plays for children and adults published: The Jack Tales, The Liberated Cinderella, Treasure Island, Galileo: Man of Science, The Jungle Book, A Christmas Carol, Connecticut Yankee, and Glorious Son of York. Stephenson has been a winner in two major playwriting contests: The American Alliance for Theatre and Education 1995 for Too Free For Me (Published by Encore), and he was awarded the IUPUI National Youth Theatre Playwriting Competition “Excellence in Playwriting” for Jack’s Adventures with the King’s Girl. In 1996, he received an Appalachian College Association, “Faculty Research Fellowship,” to research and write The World is My Parish, a drama about the life of John Wesley, the founder of Methodism. Stephenson lives in Ferrum, Virginia and he has three daughters, Janice, Jessica, and Juliet.
December 11th was the 40th anniversary of the Ferrum College Jack Tale Players’ first performance at Callaway Elementary School. From that day to this, Rex Stephenson (professor emeritus of drama) and over 400 students and professional actors have performed his adaptations of Appalachian folktales and songs several thousand times for audiences of all ages--around the mountains, across the country, and in England. In 8 nationwide USO tours they performed at 60 VA hospitals. 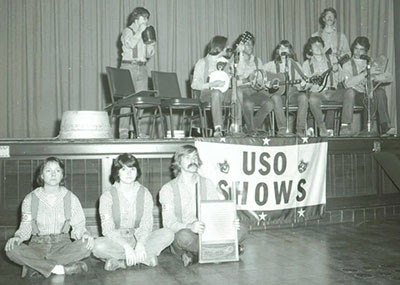 Photo of Jack Tale Players during one of their 8 nationwide USO tours to VA hospitals between 1978 and 1982, with Rex Stephenson on the floor in center.