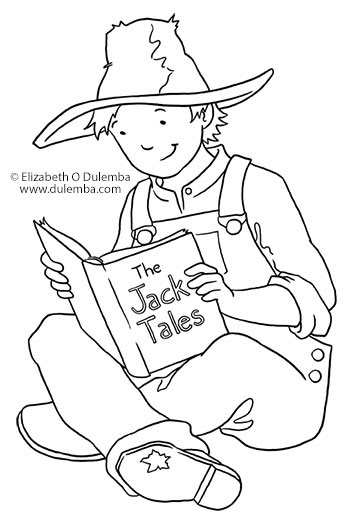 Have you read my history with Jack Tales? (If not, CLICK HERE and scroll down to read from the beginning.) I find it amazingly ironic that Jack has once again returned to my life here in Edinburgh. In fact, so many previous elements in my life have come back around here, it's getting downright bizarre - music, storytelling, and now Jack!
For my MFA in Illustration here at the University of Edinburgh, I've created a thesis project for myself: Tricksters. I chose it because I really want to learn about all cultures and mythologies, but that is too tremendous a project for one lifetime. So, I narrowed it down to one character within each storytelling and cultural mythology to act as a window into each world - Tricksters. You know Tricksters - Loki, Coyote, Bre'r Rabbit, Robin Goodfellow, Anansi, etc. Every culture has one. Or so I thought.
There seems to be some debate as to Scottish Tricksters. Some claim there is no Scottish Trickster! (And wow, that doesn't help my project along!) But some say Broonies are Tricksters. Others claim The Devil is the Scottish Trickster. And then some claim Jack.
The first time someone mentioned Jack to me (without any prompting from me), I about fell over. He's in my life again! (And if you read my history linked above, you'll truly understand how bizarre that is.)

But truly, one of Scotland's most famous storytellers, Duncan Williamson, was a Traveler and he told lots of Jack Tales. In fact, I just finished reading his Jack and the Devil's Purse, edited by Linda Williamson.
I've also heard it said that Jack is simply a common name, a medieval derivation of "John" and therefore lots of cultures have Jack Tales under names such as Jacque, Jankin, Yannis, Jean, Jehan, Ivan, Jowan, Jan, etc. That may be true, but there does seem to be a structure to certain stories which are defined as Jack Tales. He is either lazy or industrious, but he usually ends up with what he wants through clever means - hence, the Trickster moniker.
Needless to say, I need to learn more about this Scottish Jack. And considering that whenever I follow that boy, good things seem to come of it, I'm looking forward to my research!
at January 06, 2016