My dear friend and SCBWI Illustrator Coordinator cohort for many years Susan Eaddy (I was the Southern region, she was Midsouth - although she's now Regional Advisor) tacked a few days on to her Bologna trip to come stay with me and Stan in Edinburgh. No rest for the weary, we had more playing to do! And since it's spring break at the Uni, I really could play! But first, we had to get to Edinburgh.
Our original plans had a layover in Amsterdam, with which we'd hoped to pop into the city for some brief sight-seeing. Sadly, the airline had overbooked our flight and had to reroute us through Paris. With the change, it was a day of pure travel with no time to leave the airports, but we did get some vouchers for the inconvenience. (I know, I know, get out the tiny violins.) This was lunch in Bologna. 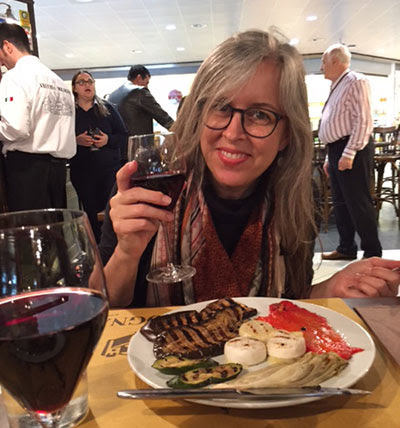 And truly, we were so tired, we barely noticed where we were. (This is Paris.) 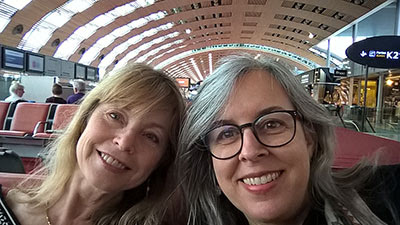 But finally we made it home. HOME!

I don't know that Susan saw these, but I love the sculptures at our wee airport. 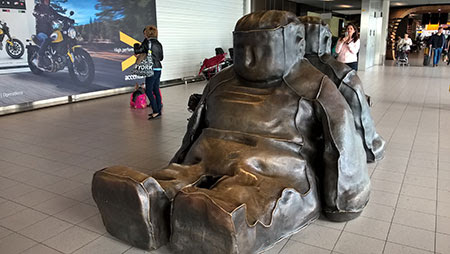 Along with our home flowers, the thistle. 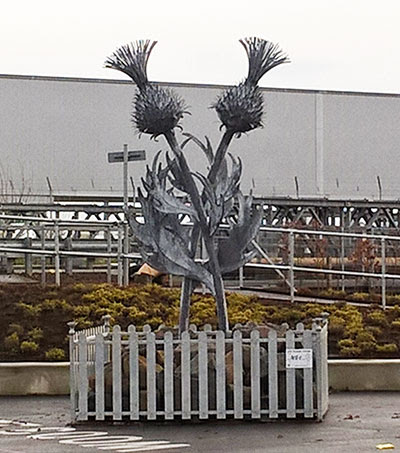 Susan and I fell over when we got to my flat, but somehow awoke the next morning raring to go.
I planned a packed itinerary for Susan's short stay... Day 1 was all about being a tourist in Edinburgh. It began on the Royal Mile with a right and proper Scottish breakfast, which consists of sausages, mushrooms, beans, scrambled eggs, a roasted tomato, black pudding, haggis, bacon, potato scone and toast. I need to replace this with the photo of Susan - because this is her breakfast and she ate all of it! 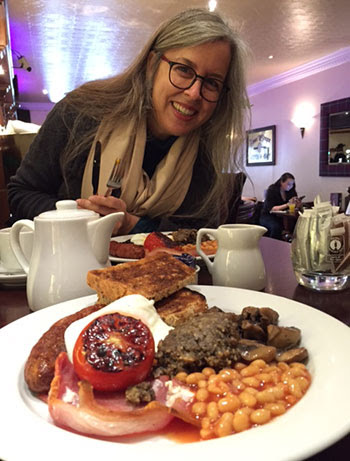 Then we went to the castle!
The castle sits smack dab in the middle of town on top of a long-dormant volcano. You can never get lost in Edinburgh because the castle is always visible. 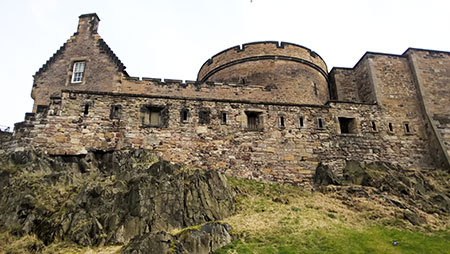 It's also why you never trust Google maps in this town, as it doesn't take into account altitude. It's a hike to get up there! 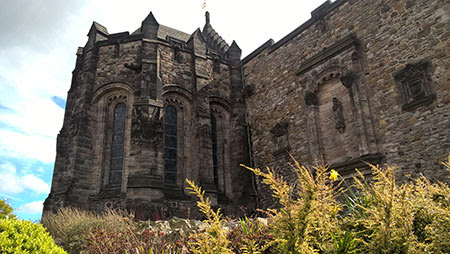 Believe it or not, but I hadn't been to the castle yet. I was waiting for exactly this sort of moment, to share it with a friend. You walk up the Royal Mile and the castle sits at the top at the far end of an enormous esplanade, where they hold the Royal Military Tattoo each August.

The views are AMAZING. 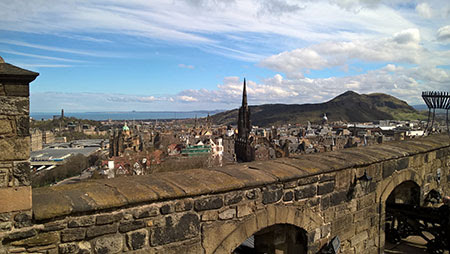 I made a short video of it... Video 1: Video 2: We bought our tickets online before we left the flat, so were able to walk right in through the Castle Gatehouse. That's Robert the Bruce on the left and William Wallace on the right. 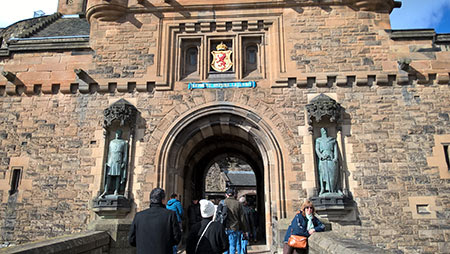 Inside, the buildings date from the 1800s, all the way back to the 1100s. And many of the items have left the castle, been returned to the castle, or were sent to the castle later. For instance, the Scottish crown jewels, which were smuggled to safety during Cromwell's time (he melted down everything he could get his hands on to pay his troops); the Stone of Scone or the Stone of Destiny, which will be loaned to England when Charles is crowned King; and the cannons are from Napolean's ships and have happily never been fired on any of the view below them. 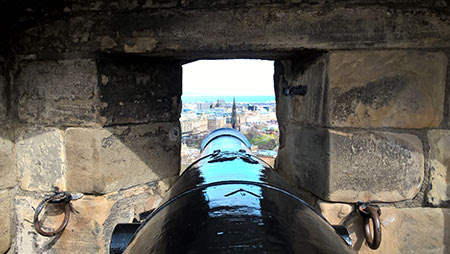 Although, there is one cannon they fire off at 1:00pm each day to help folks keep time. Why not at noon? Because that requires 11 more rounds of shot, and the Scottish are... *ahem*...thrifty. Seriously.
Several buildings stand as war memorials where books contain the names of those lost. Out of respect, photos aren't allowed inside. Outside, the building is gorgeous and a fitting tribute. 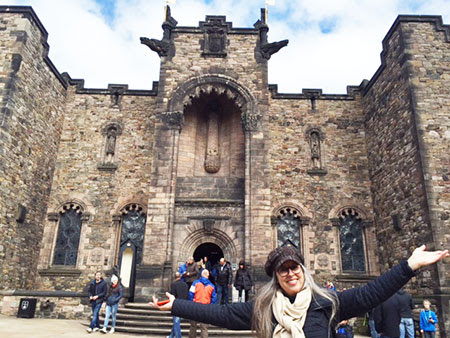 There's even a cemetery for the soldier's dogs. 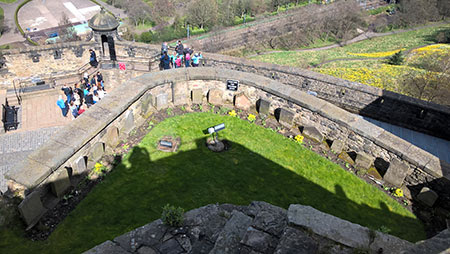 We saw Mary Queen of Scots' chambers - quite lovely. And we saw family trees which try to explain the lineage of Kings and Queens. Good luck figuring that one out. Although GAME OF THRONES is supposedly modeled after the struggles between the Thorn and the Rose. (Click the image to watch on Youtube.) 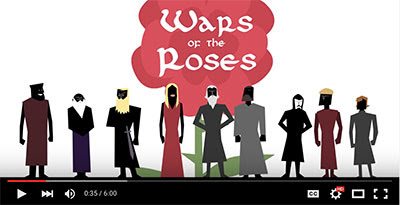 One of the most intimidating rooms in the castle was the dining hall, where they keep an extensive collection of weapons. It looked like the perfect set for the Red Wedding. 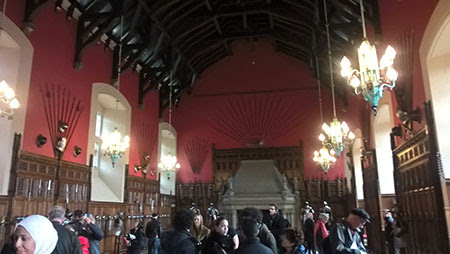 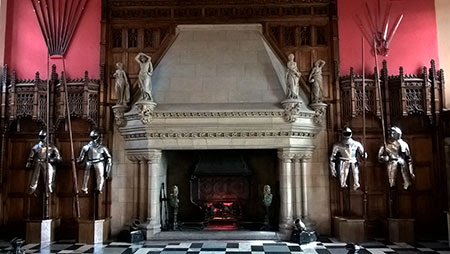 Again, most of these weapons were sent to the castle later. Although I have to admit, many of them looked well-used. ACK. 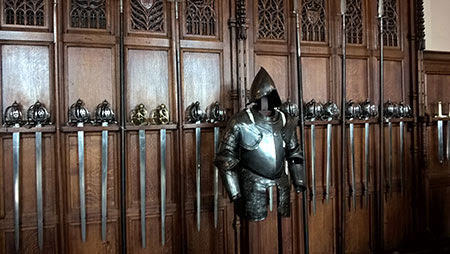 There was so much to see and do, we truly could have stayed at the castle all day, which we nearly did, because we didn't want to miss the WEDDING - a real one!!! (Coming soon...)
at April 18, 2016

Is that the cannon named Munsmeg?

I believe you are talking about Mons Meg: https://en.wikipedia.org/wiki/Mons_Meg . That one is not fired anymore! There is, however, a cannon fired every day at 1:00. I'm not sure what it's named, but it seems to be a WWII cannon. e