I purchased a bus pass and bought my tickets for the fair early so that I wouldn't have to wait in the lines. I was READY! Okay, I was physically ready. Mentally, there was no preparing for something like the Bologna Children's Book Fair. I was completely overwhelmed.
There were no less than six halls (buildings) which were each the size of a football field and each filled with booths representing publishing houses from all over the world. It made it seem like the ENTIRE WORLD IS ALL ABOUT CHILDREN'S BOOKS! LOVED that! LOVED the connections I made and saying 'hi' to trade industry buddies. But I was also unbelievably humbled by the amazing talent represented there. (These were some illustrated trees being auctioned off for a good cause.) 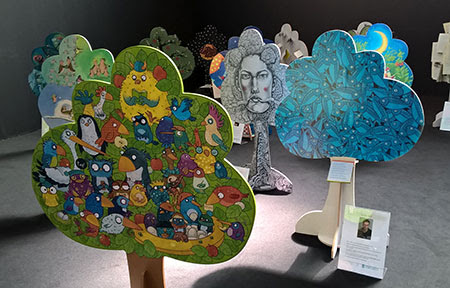 As I walked around, I realized again and again, "e, you have got to up your game!" (Here's me sneaking up on a Stormtrooper.) 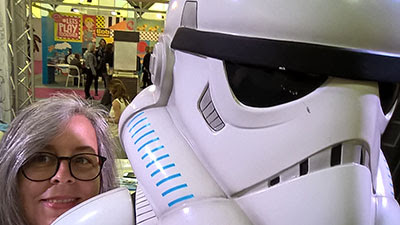 In some ways, I wish I'd seen the Fair when I was starting my career - to see what I'm truly up against. But on the other hand, if I'd known, I'm not sure I would have had the guts to keep trying. So, hmmmm.
I learned so many things, though, which I'll try to share with you while I'm still raw with processing it all. (My brain hurts!) First, I saw what I believe to be a disparity between the showcased illustrations and the actual for sale, published books. What they say the trends are and what actually sells seem to be two different things to me. The market is the true decider. Buyers do have power, and wow, do their tastes vary.
There is as much demand for the more showy, colorful commercial books as there is for the trade books - maybe more. Although that market doesn't venerate the creators like the trade industry does - it's more about licensed characters, and they are POPULAR. 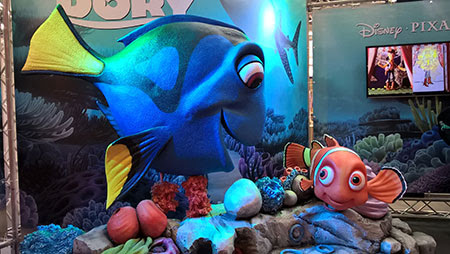 Different countries/cultures do have different looks, although there's a lot more overlap than you might think. Fairs like this, I think, are homogenizing the market a bit, which is a shame. That said, there are some really stunning new and inventive looks coming out of Indonesia, India, and Germany. Heck, everywhere really. Every culture has it's run-of-the-mill stuff and it's stars. But there are some truly exciting things happening all over the world. It was a treat to get a taste of that.
The booths themselves varied considerably. Some were big and fancy and some were small and humble, and sometimes it had nothing to do with the size or reputation of the publishing company. (Heck, Lawrence King, publisher of Johanna Basford's coloring book SECRET GARDEN was one of the smallest displays there - and we all know they have gobs of money!) Here were some of my faves: 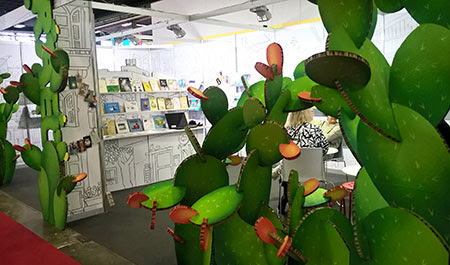 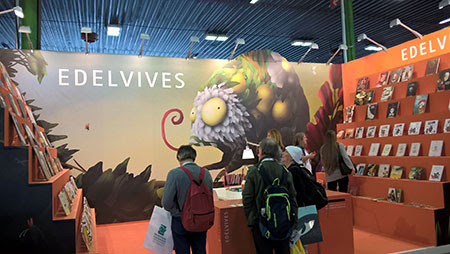 Here was one I didn't expect to see there - very modestly and quietly tucked into a corner. 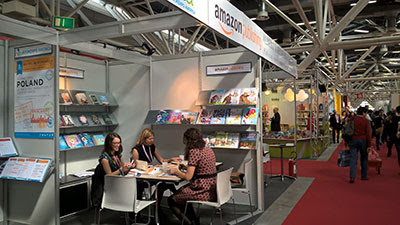 I loved getting to finally meet my publisher from Little Pickle Press, Rana DiOrio for the first time. She's just as dynamic in person as I imagined. And they had a great space in the Children's Books USA booth, which also housed some other great publishers such as Peachtree Publishers, Holiday House, Charlesbridge, etc. They were in nice company and made a strong showing. Rana was busy the whole time talking foreign and licensing rights. Go Rana! She's been working so hard to get the word out about A BIRD ON WATER STREET. See it in there? (The fact that I didn't get a photo of the two of us is a testament to how overwhelmed I was. Can you say 'deer in headlights'?) 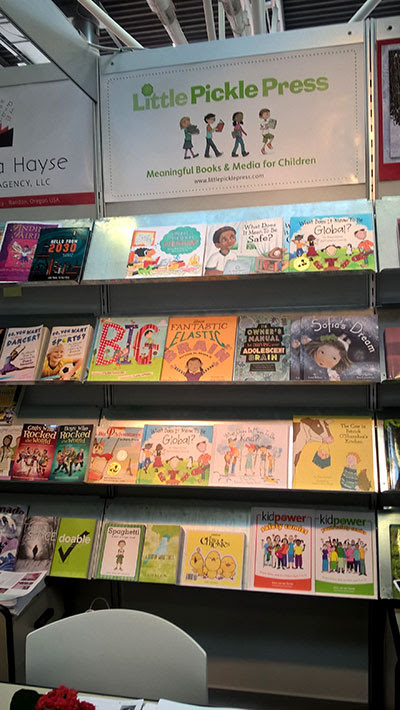 There were indeed a ton of illustrators there - a dedicated post on that is coming soon. In the mean time, I quickly found that the way to get to talk to folks in the booths was to introduce myself as a blogger with over 3,600 subscribers to my newsletter rather than as an author/illustrator. Eyebrows went up at my subscriber numbers and I had their attention. That was nice, especially as I'm trying to get to know the UK market and am looking to feature more UK books on my blog. I was given a ton of catalogues and emails to PR folks. I'll follow up with them when I get home. And of course I gave them my info, on an illustrated postcard. "Oh yeah, I'm an author/illustrator too." :)
I especially loved meeting people who I'd been emailing with for years. Some were people I haven't worked with yet, but would like to (and who happily recognized my name). And some were publishers I have worked with in the past and would like to do more with in the future - like Judy at Free Spirit Press. (This is their booth.) 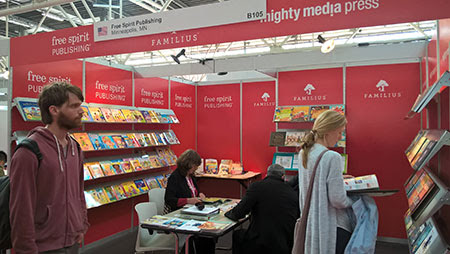 Mostly, it was simply odd reconnecting with industry friends in ITALY. We had chats, hugs, drinks, dinner - you name it. Highlights were drinks with Kelly Barrales-Saylor and Jordan Kost of Albert Whitman, running into Alvina Ling of Little Brown and Yolanda Scott LeRoy of Charlesbridge, hugs with Leonard Marcus and Martha Rago, having drinks with Erzsi Deak of Hen & Ink Literary, meeting my publisher Rana DiOrio, and seeing all my SCBWI buds. It seems I only ever see these folks in exotic places anymore and I'm okay with that!
I saw old friends, made some new ones, and soaked up as much as I could about books, the market, illustrative directions, and inspiration. I do feel like I took advantage of the book fair as best I could have. That said, I only went for three of the four days. It was enough, truly.
Meanwhile, I am trying to process all the great conversations and experiences I had. Any one of them would have been enough to keep my brain busy for days. I have enough to keep my brain busy for months!

Really astute blog on Bologna, Elizabeth. I was there for just the first day and am still processing the sites and info. from that massive first encounter, to blog about it, too. Thank you for sharing your bright observations!

Thanks for the in-person, up front report, e! It was a bit overwhelming in itself! :0)

Loved the play-by-play! Can't wait to go (one day!). Thanks for sharing!

Anni - then I described it well!!

2018 Bologna Children’s Book Fair will be held from 26th to 29th March as a four-day event in Bologna, Italy. Bologna Book Fair is a highly regarded event, popular for showcasing products and services related to the field of digital media, publishing, and licensing, along with discovering new market trends in children’s book industry. Not only this, but the important authors and illustrators in children and young adults book industry, also participate in this prestigious event.