I'll admit, I didn't go to the book fair on the 4th day - I was so tired I was pretty sure I wouldn't have made a good impression on anybody I met at that point. And truly, I felt like I'd done as much as I could. I connected, reconnected, observed, was inspired, and learned a whole new side of this industry.
Of course, I wasn't nearly as tired as the SCBWI booth folks. They were kind enough to invite me along to the fall-apart party at Osteria De' Poeti. 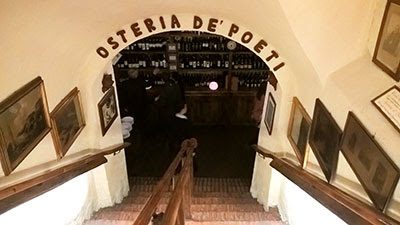 Like so many businesses here, if you didn't know about it, you'd never find this place. In fact, that was one surprise about Italy. When businesses close here, they really close. As in, a giant metal garage door comes down hiding any sign (or signs) of the business behind it. There is no wandering at night to see what stores might be available to you the next day - the signage gets hidden behind those big, metal doors. That includes grocery stores, pharmacies, restaurants, etc. This is a town where you need to know where you're going.
Happily, my dinner-mates did. We ended up with a big group at a great restaurant hidden at the bottom of some stairs on a quiet back street.

What a treasure this place was! The asparagus were some of the best I'd ever had. 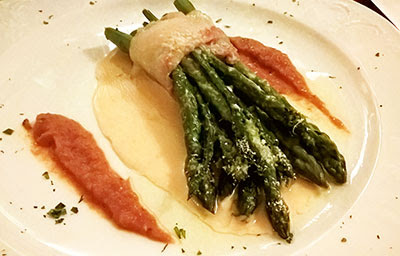 It was followed by "special" pasta (a.k.a. gluten free) with Bolognese (of course!), and a meringue cake that I could actually eat. Woohoo!!! Of course, I shared it because, good lord, it was a lot of cake! 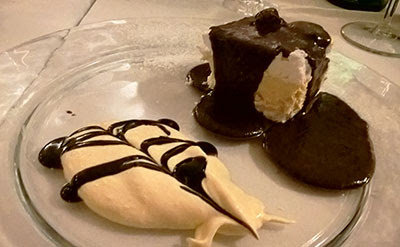 But with the long days, all the walking and full tummies, Julie Hedlund and I were rather tired. 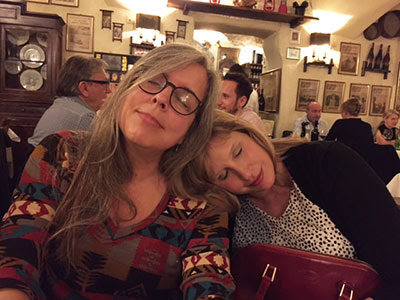 It was a right and proper fall-apart dinner. And well-deserved at that. Sogni d'oro - sweet dreams!

Yes, it was a great meal. Thanks for the blog post, Elizabeth. It reminds me what a great time with SCBWI pals.

Indeed! Although I'm sorry we didn't get your smile more prominently in the group photo! Hugs, e