The Illustrators' Wall at the Bologna Children's Book Festival

For years I'd heard about "The Wall." This is where illustrators can tack up examples of their work for passers-by to check them out and take samples. I heard this was the biggest year for the fair ever, but I'll admit, I wasn't expecting this. The Illustrators' Wall was not just one wall, it was several, and it went on... 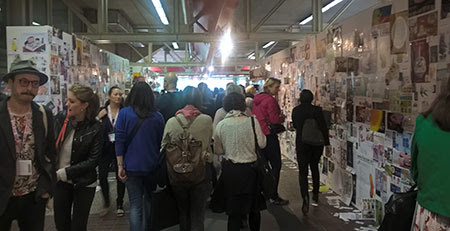 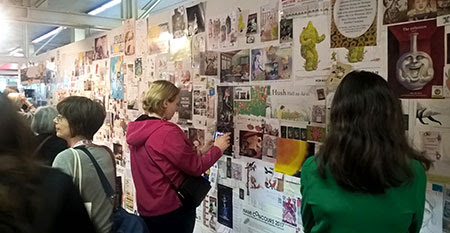 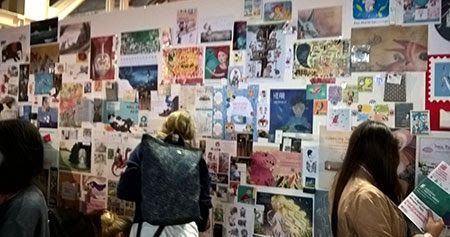 Folks got there early to claim space with posters that had little tear off tabs (I thought these worked best). 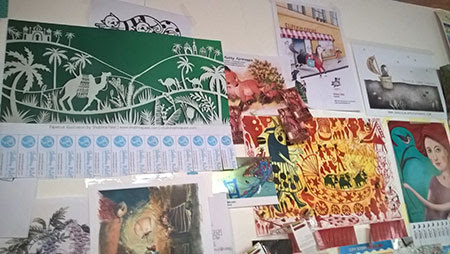 People seemed mostly respectful about not covering up anybody else's work. And some folks got quite creative with their displays. 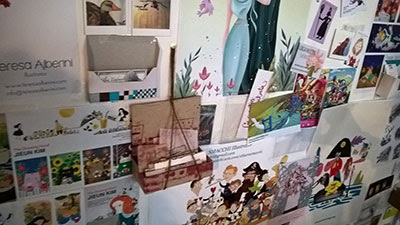 This was a common presentation - the poster with the card or postcard holder. 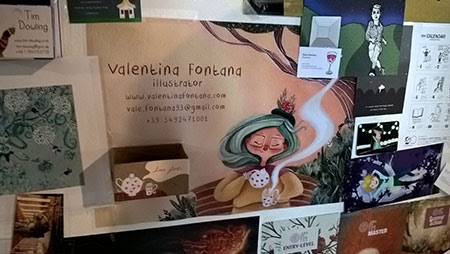 This was my fave, an actual pop-up display. I bet they got some work. 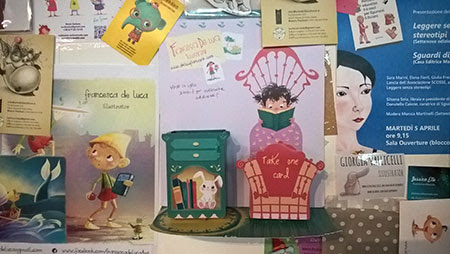 So, do people actually get work from this? At first I worried that the people taking the cards were mostly other illustrators, and yes, there was some of that. But I also saw a publisher-looking-sort-of-guy going down the wall and truly scouring everything, taking tabs and cards with clear intention. I say intention because the tabs oftentimes didn't have artwork on them (I thought that was a loss), just contact info. In other words, there was no reason to take one unless you were going to look up the artist later and perhaps try to get in touch.
And I did hear of illustrators making deals at the fair. One creator was there to finalize a contract with her publisher over a deal that had been worked out before-hand. My friend Julie was busy selling foreign rights to her book, which had been traditionally published, but the house had sadly closed. Another illustrator had been coming for years - an editor recognized her and set up time to talk to her after the fair. So yes, deals were being made. I had several lovely conversations with editors - yes, even in the notoriously long lines for the bathroom, which is where I hear a lot of deals end up getting made! That will be hilarious if anything comes of those. Overall though, I'm not sure the fair is something you need to do if you have an agent - if you already have an 'in' with the publishing houses. I got the impression that the fair was a main resource for Italian or European illustrators, who don't have representation elsewhere.
That said, the sheer volume of competition was completely overwhelming, unnerving, intimidating and educational. There was a ton of TALENT there but it was so varied - even in the Illustration Showcase. Styles were all over the place. Boris, Catherine and I tried to make the best of it. 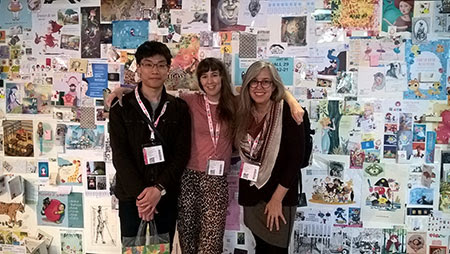 But it gave us all food for thought. Boris and I walked back together, talking about it. We stopped at a small playground. This photo sums up Boris' reaction perfectly. 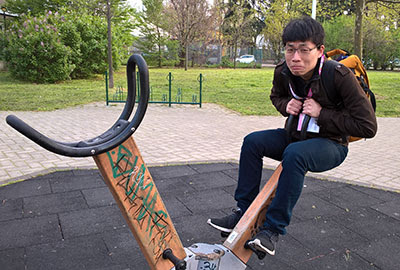 My big take-away? You absolutely cannot predict the market, or position yourself to sell. Tastes are too varied. All you can do is create what feeds your soul and hope it's of interest to somebody else.

Thanks for the interesting report, e! You're having quite an adventure!

The last sentence was so important! I needed that today. Am enjoying following your grand adventure!

I'm so glad Kathryn. And yeah - that last idea was a big one for me too! Hugs, e

It sounds like an Alice adventure. Have a great time and when you can please see my plea for help in your email.

Yes, that last sentence sums it up. For better or worse I think we all tend to slant a part of what we do to try to appeal to what we think people will like, or what we may have done before that connected somehow. I guess in every aspect of life it's not necessarily helpful to try to do what we think will make people like/value us, we should just be ourselves. Hard to figure that out, though, in the context of trying to make a living!

Daniel - YOUR last sentence says it all too! That's exactly the issue, isn't it?