First off, please give a cheer - my TEDx Talk "Is Your Stuff Stopping You" has over 10,000 views on YouTube - woohoo!

Now, on to the story...
So I returned to the studio after most of Spring Break passed only to discover that every locker in our room was open. (Except for the ones with actual locks on them.) That was weird. Then I noticed that my bag of peanuts and raisins was open. No way I left it like that. I looked at the other desks - food had been left out there too. In fact, on one desk there was a half-eaten ice-cream cone. Strange (on so many levels).
I concluded that somebody had been pilfering through our things looking for something to steal and sell, and eating our food while at it. There had been some random thefts in the building, so I figured this ought to be on Security's radar. So, I reported it to the building's receptionist. She called security and soon after, they stopped by to talk to me and whoever else was there (not many folks had returned yet).
Turned out, other departments had similar stories. Interior Design thought they had a rodent because of the food mess left behind, and the cameras caught somebody sleeping on the 5th floor that same night. We definitely had an intruder, but luckily, nothing of value was taken. Although, Security took a few items they felt probably had good fingerprints on them for documentation, just in case. They were on it. (I mean this positively - truly, they were on top of it.)
As follow-up, we received emails to please be aware of who follows us into the building when we use our pass cards. Problem with that is, we are art students. Sometimes art students can look pretty rough, so who's to say who looks suspicious or not?
I also got an email requesting that I file a police report. But, um, nothing was taken (except by security) other than food, and I just wasn't willing to go to bat on that one.
No matter. A week later, who should show up but two officers of the Scottish Police Department. Our receptionist pointed them to me. Spring Break was way over at this point and the classroom was full. Can you say embarrassed?
Why are police going to Elizabeth's desk?
Gads!
However, the officers were very nice and said that they really needed a point person on the police report (?!?) to use for future reference, and since the intruder took my nuts...
*ahem*
Ever so nicely I explained that I really didn't want to have my name in any police reports, and certainly not one where I complain that somebody stole my nuts.
Imagine! If I ever needed to file a serious report and my name came up in their system with that! Well, they'd think I was... I was... (forgive me) NUTS!
At any rate, the kind officer understood and said he'd try to find a work around. Meanwhile, Katy Wiedemann got a picture of the whole thing... 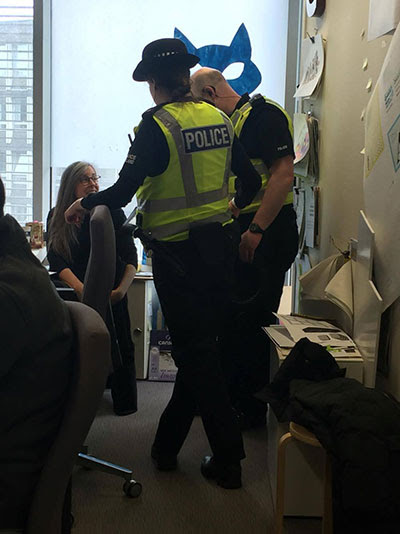 This is so unbelievably awesome! I love your stories!

Welcome back to school, right??!!! Your story has me cackling at the breakfast table. I lOVE this photo of you at your desk with the Police. I am only sorry they are not wearing kilts.

Susan - OMG - wouldn't that have been great? I don't think I've ever seen the police in kilts though. Maybe the military during the Military Tattoo, but that's different. :)