My dear friend, Vicky Alvear Shecter has a new book out called WARRIOR QUEENS, and I can't wait for you to read it! You may remember Vicky from her book CLEOPATRA'S MOON, CURSES AND SMOKE, HADES SPEAKS, ANUBIS SPEAKS, etc. WARRIOR QUEENS is illustrated by the illustrious Bill Mayer, illustrator of many magazine covers like TIME, NEWSWEEK, and SMITHSONIAN, as well as several picture books, including THE MONSTER WHO DID MY MATH and HIDE AND SHEEP, also written by friends of mine. Both Vicky and Bill are from my old stomping grounds in Decatur, Georgia, home of the Decatur Book Festival and Little Shop of Stories. So, it is an absolute pleasure to have them both here today to talk about... 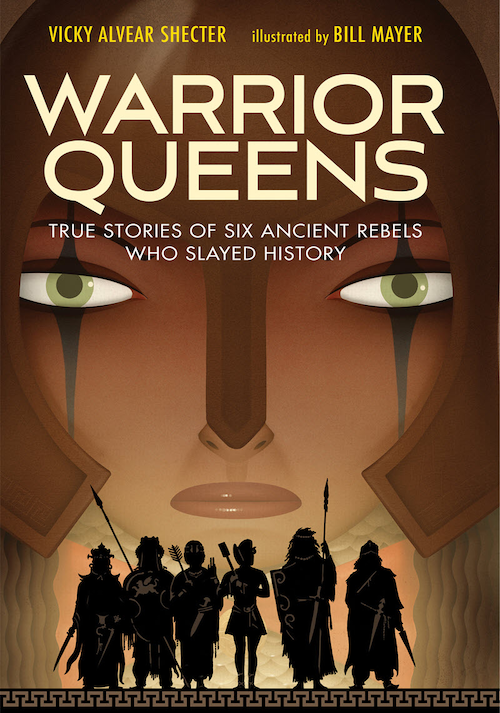 e: Vicky, what inspired you to write WARRIOR QUEENS?
Vicky: As an ancient history nerd AND a feminist, it's frustrating to see what little record there is of extraordinary women in the ancient world. I'm just fascinated by the chutzpah it took for these women to not only rule their nations, but fight their enemies when challenged. Women have always been on the front lines!

e: Bill, what is your creative process/medium, can you walk us through it?
Bill: Everything starts off with thumbnails. Small layouts to help visually organize elements and compositions. Occasionally color suggestions if they're important to a concept.
From there, tighter sketches to work out important details. On this project, the illustrations had to be extremely accurate historically. There was a ton of reference to wade through and organize. Costumes and weapons for each “Warrior Queen.” 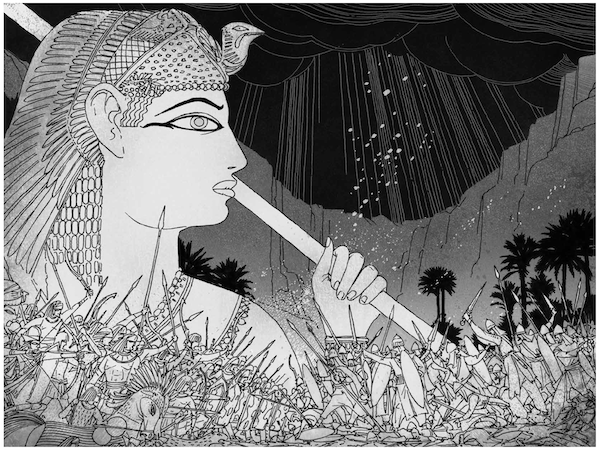 Hatshepsut
e: Bill, what was your path to publication?
Bill: I went to Ringling when I was 17, where I met my wife, Lee, also an artist. We graduated three years later and moved back up to Atlanta where I got a job at a studio, Graphics Group. I worked at a couple of studios for about 4 years before going out on my own. It was a pretty easy transition. That was about 1976, been staying busy ever since. My first published piece would have been a drawing of a bicycle, for a promotional piece for the studio. A very small spot but I do remember how great it felt to see it in print.

e: Vicky, how did you feel about Bill’s illustrations when you saw them?
Vicky: BLOWN AWAY. They are simply gorgeous and I love how he captured the women and their armies. His work is brilliant! 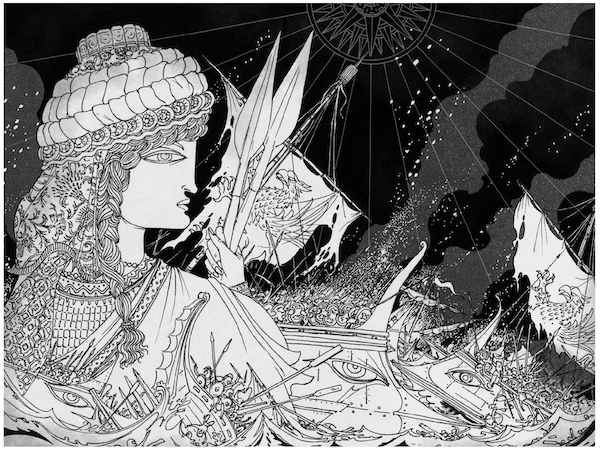 Artemisia
e: Bill, is there a unique or funny story behind the creation of these illustrations?
Bill: It was very difficult keeping all of the reference separated and accurate in six different time periods and six unique geographical areas. At one point, I tried to introduce maps into the sky of the illustrations to add some historical reference to locations, but this was rejected because it was going to require too much research to make sure the maps were accurate. Nothing particularly funny...

e: Vicky, did you have a favorite Warrior Queen?
Vicky: I love all of them but I'd have to say my favorite is the Nubian Queen, Amanirenas. I love her because she delivered the biggest burn to the most powerful man in the world at the time (you'll have to read it!) and, in negotiations to end the war, managed to get everything she wanted. That is unheard of and speaks to her power. Also, she lost an eye in battle, so there's that! 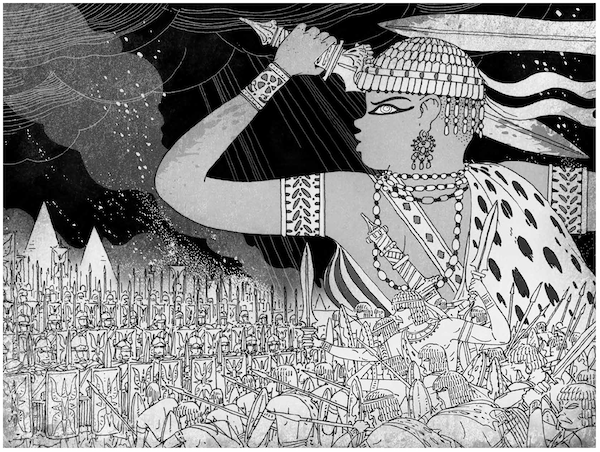 e: Bill, what do you think makes an illustration magical, what I call "Heart Art” - the sort that makes a reader want to come back to look again and again?
Bill: Sometimes it’s hard to write a rational explanation for a piece of work done a year or so ago. It’s strange to me, the process of painting spills in so much of it’s own momentum that I scarcely remember working on it. It’s like someone else is in control. It’s like a previous life experience.
I'm always intrigued by art that surprises your eye, or makes you think in a way that you don't normally think. Illustrations with lots of details always leave something to come back to.
For me personally, a great illustration comes from an uninterrupted creative process that allows you to move fluidly from idea to sketch to final. I do try to keep some enthusiasm toward projects I'm working on. Sometimes not finishing everything in the sketch can allow me to start fresh. Since the “style” we chose on this was similar to my sketchbook work, it was a challenge to keep them spontaneous.
Miro believed that an artist shouldn’t look at his work when he paints, that only by blocking your vision can you reach your true inner self. I have to admit I peeked several times. Maybe it’s a deeply psychotic infatuation with death and the true desire to become literate, or maybe it’s just a portrait of a bunch of warriors hacking each other to bits... 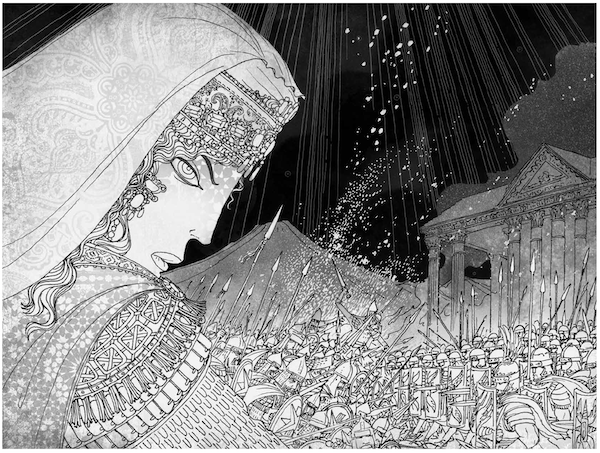 Zenobia
e: Bill, how do you advertise yourself?
Bill: I have websites, blogs, ads in business publications, gallery shows, entering trade competitions, direct mail, I have a rep in New York, Tricia Weber (The Weber Group)
Mostly I do good work for people, I'm easy to work with and the word gets around.

e: What is your favorite or most challenging part of being a creator?
Bill: I love what I do. It's a tactile therapy of playing with materials. Playing and experimenting with new materials is what helps keep the work fresh after 40+ years. I think the key is to love what you do. 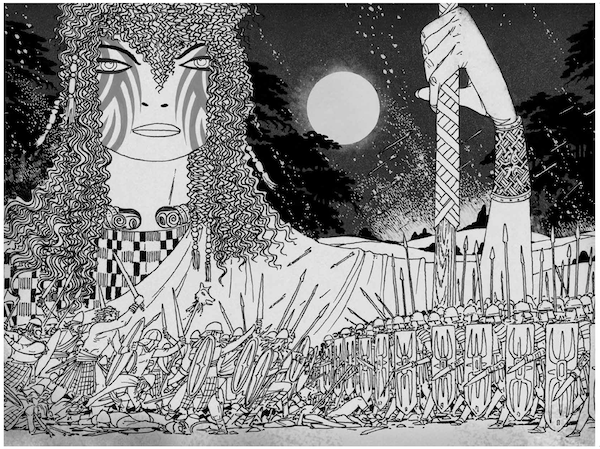 Boudicca
e: Is there something in particular about this story you hope readers will take away with them, perhaps something that isn’t immediately obvious?
Bill: The illustration of the queens riding on the back of elephants. One of the “Trung” sisters had huge breasts. They had to tie them behind their back when they rode into battle. 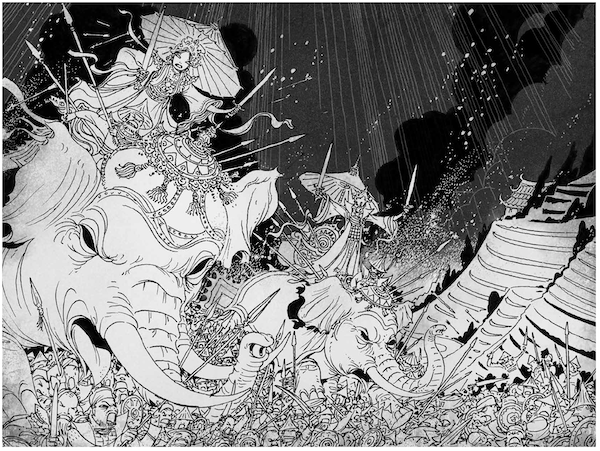 Trung Sisters
e: OMG! Bill, what are you working on next or what would be your dream project?
Bill: The one that's on my table now is always my favorite. Right now, I'm doing a label for a limited edition scotch. (The rare, $250-a-bottle stuff....) It's painting of a anthropomorphized pig in a top hat.
But generally I love my work and anything I'm working on is my new favorite.

e: Vicky, how do you hope WARRIOR QUEENS will be used/loved?
Vicky: My hope is that young readers will get hooked on history—especially ancient history—the way I was when I came across wild stories from the ancient world. Since most of this is not taught in schools, most young readers will never know about these fascinating and rich histories. And that's a shame!

e: Indeed! I'm glad you're telling them about it! Folks, you can read an excerpt HERE! 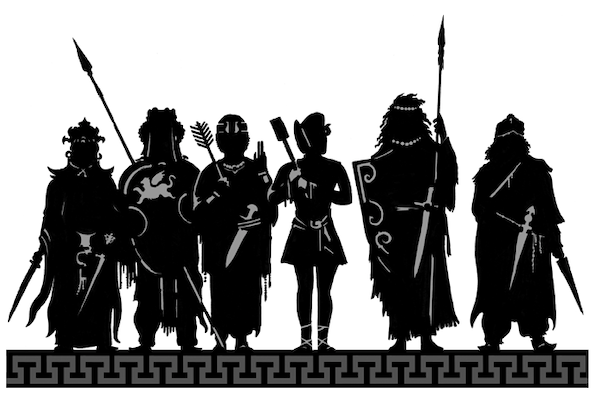